Hi, my lovelies! Thanks for hanging out with us again. Today, R.G. Emanuelle (who has been imprisoned by Women and Words all month…MUAH HA HA!) is going to have a chit-chat about characters and names. What, after all, is in a name? Well, I’m of the opinion that quite a lot can be. Let’s go see… 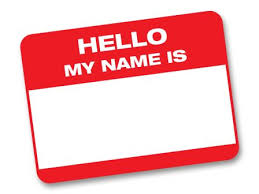 Hi, gang at Cheers (contest: identify the character who said this). This week, I’d like to talk about the issue of naming your character. I bring this up for a very personal reason.

I just completed a novel, and if you’ve been reading my blogs this month, you know that’s it’s been in the works since the early 1990s. My main character has always had the same first name, from inception right up to now. I’ve never changed her name, never even considered it. Her name is even in the title of the novel, which also has always been what it is.

I did, however, decide to change her last name. So, I began to do some research on names of that particular nationality. And what I found made my heart stop for I think about 45 minutes. It turned out that my character’s first name did not come into use until some time in the 1800s. My plot takes place in 1900, so it shouldn’t have been a problem. Except that I have scenes that take place in the 1600s, with this character. She’s a vampire, you see, and she moves from England in the 1600s to the U.S. at the beginning of the 20th century.

I wanted her to have an old-world name, but not something too fuddy duddy. It had to be appropriate for a vampire but not so unusual that she can’t pass in “normal” 1900 society. Something strong-sounding but also befitting a beautiful woman. And, of course, something appropriate for her cultural background.

Her name came to me quickly and even 20 years later, I have no desire to change it because I feel that it’s perfect for her. But once I found out that her name didn’t really exist until more than 100 years after she was born, what was I going to do? At first, someone suggested that I can have a quick conversation take place between the m.c. and someone else wherein she explains that she changed her name at some point. But when I remembered that there are scenes taking place 150 years earlier, I knew it wouldn’t work.

Okay, I lied when I said I’d never considered changing her name, because at that point, I began considering it. That lasted about two seconds. But it did get me thinking about the importance of characters’ names. Here are my own personal rules about naming characters (although some are obvious and universal):

1. A character’s name should be appropriate for her/his time period and cultural background.

2. Keeping the above in mind, it shouldn’t be something that the reader will laugh or roll their eyes at every time they pick up the book (unless that’s what you want). You know, like those movies that are supposed to be serious, but they’re so bad that everyone laughs through them. You don’t want that happening to your book.

3. It should be fairly easy for the reader’s eyes and mind to grasp. If you make the name 17 characters long and difficult to pronounce, you may try the reader’s patience after a while.

4. Don’t be overly clever. I know we all want to give our characters unique names, but for the love of god, weigh all the factors of the story before you decide to name the m.c. Aramellia Noxema Cardigan. Unless she’s a drag queen, she has no business having a name like that.

5. Sometimes, names sound made up. Names all over the world criss-cross the alphabetical spectrum, and you can make up anything and it could possibly be someone’s name somewhere. But, sometimes, a name just sounds made up. Phony. Contrived. I’d change it.

6. Names shouldn’t sound similar within the same story, or it may cause confusion for the reader. Tammy really shouldn’t get involved with Pammy, and Macey shouldn’t go out with Lacey. Despite the fact that this often happens in real life (hell, I even know same-sex couples with the same exact name), it doesn’t work in fiction.

Andi interjects–I know an opposite-sex couple with the same name!

7. Use different style names from one story to another. I sometimes gravitate to similar-sounding names, so I make it a point to not do that.

For me, there needs to be a good reason for the character’s name to break these rules. For example, if your m.c. immigrates to the U.S. from Poland in 1932, she should not be named Rosario. If she is, perhaps she is running away from someone in her homeland and wants to change her identity. If your m.c. is a 15-year-old African American living in inner-city Chicago in the present day, the only reason her name should be Muffy is if it’s a nickname given to her as a joke.
My personal technique for finding names is to go to a baby name website. I choose a letter (or letters) that I’d like the name to start with and search that listing. There are many of these websites and they list names that you may not even have thought of.

So, what did I do with my main character’s name? I left it. I decided that I needed to exercise my right to literary license. And so what? Who, aside from MAYBE one or two people, is really going to know that my character’s name was made up by a writer in the mid-1800s? Yes, that’s right—a writer made it up. So, if a writer can make up a name (that interestingly comes into common usage), then I can turn my head and pretend that the name is older than it really is. And in the end, who really cares?

How do you name your characters? Do you open up a phone book to a random page and jab the page with your finger (and that opens up interesting possibilities)? Do you put a few different names in a hat and let your dog pick one out? Share your character-naming techniques.

So, that’s it for my guest blogs. I hope I offered something useful and that I didn’t bore you to tears with my ramblings. Be well and write lots.

P.S. There’s no real contest for naming the character who said, “Hi, gang at cheers.” That was just for funsies.