Just a quick blog to exhort you to read some steampunk. Seriously. Try it. I think you’ll like it.

For those not in the know, steampunk is a genre of fiction that combines elements of science fiction with Victorian sensibilities and contraptions. As this blogger at steampunk.com says, it’s “a subgenre of science fiction and fantasy that includes social or technological aspects of the 19th century (the steam) usually with some deconstruction of, reimagining of, or rebellion against parts of it (the punk).” It also can include alt-history, which I find endlessly fascinating.

Take this, a book to start your steampunk journey: Cherie Priest, Boneshaker.

Here, in the alt-19th century, Russian prospectors who wanted to compete in the Klondike gold rush hired an inventor named Leviticus Blue, who developed a monstrous drilling machine. Unfortunately, something went terribly awry and Blue’s machine, the Boneshaker, drilled into a vein of “blight gas” beneath the city of Seattle. The gas, unleashed, created hordes of undead now wandering the streets of a once great city. Survivors who got out built a massive wall around it, leaving those who didn’t get out to eke out a subterranean existence, hiding from the undead. But one boy wants to go into the city. He’s the son of Leviticus Blue, and he wants to know more about his father, and about what really happened with the Boneshaker.

Boneshaker was nominated for both the Hugo and Nebula awards, the top awards offered in science fiction. When you read it, you’ll understand why.

Or perhaps you’re into more of the paranormal/Victorian-style cozies, yes? If so, Gail Carriger’s your woman. Check out her Parasol Protectorate series, which starts with Soulless: 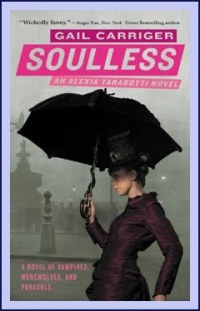 Alexia Tarabotti has several social dilemmas to deal with in alt-19th century London. First, she has no soul. Second, she has yet to marry. Third, she was attacked by a vampire, which is wholly antithetical to propriety. Something is wrong with the vampire hives in the city, and Tarabotti might be just the lady to find out what it is.

Two very different approaches to steampunk, but they’ll give you the overall flavor. And if you happen to own a copy of my edited volume Skulls and Crossbones (with R.G. Emanuelle), the story “Captain, Hook, and Mr. Shrike” by Cat Conley is steampunkish. So you see, it’s a genre with a wide array of authors, a wide array of perspectives, and a wide array of stories. Give it a whirl.