Hi, all! Our adventurer in the UK, Stevie Carroll, brings us her report on the annual UK meet for Readers, Writers, and Reviewers of GLBTQ fiction, a conference/workshop/hang-out extravaganza for all things GLBTQ fiction. She’s talked about it in the past, and here are some of her descriptions about the panels, hopefully to whet your appetite even more about what’s up in the UK.

Last month, I was in Brighton for the annual UK Meet for Readers, Writers and Reviewers of GLBTQ fiction, which I’ve talked about before (see HERE).

And here’s a shot of Brighton. It’s a seaside city, so lots of lovely views to be had. 😀

Oh, and here’s the hotel where the Meet-up happened: 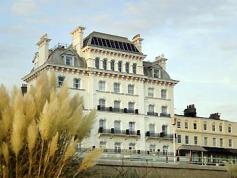 I hitched a lift over with Charlie Cochrane, writer of delightful historical fiction, including the Cambridge Fellows series and her smashing daughter (there to keep all the rest of us in line), and spent a couple of happy hours catching up with old friends and making new ones until my roomie, fellow writer Elin Gregory arrived. We went off in search of food, and found an outside table at a restaurant where the calamari and chips were lovely, but the service was a little slow. Then I encountered a bunch of roving Meet-attendees, wandered around with them for a while, and then took them back to the same restaurant to see that they all got fed.

On Saturday, we were awake bright and early, and made it into the main hall in reasonable time, where we acquired our fabulous goodie bags (bags sponsored by Dreamspinner Press, contents — including free books — supplied by various attendees and publishers). Over the course of the weekend, I may just have contrived to end up with three different f/f anthologies from Xcite books, giving away my original m/m freebie in the process.

The first item on the agenda was novel openings. Various authors read the initial 150 words or so of one of their published stories or works in progress. I went with the start of ‘The Footballer’s Mistress’ from A Series of Ordinary Adventures:

It was the men that woke her up. Noisy men, with their machines, their tools, and their shouted conversations. After so many years of silence, the din would have deafened her, had she still ears to hear; the clouds of brick dust would have choked her, had she still needed to breathe. Cooped up within the walls for two score years or more, before she had finally slept, she found she could now drift outside. It intrigued her that she could do so, and made her curious to see if the world she remembered was much changed by the passing of the ages.

After each group of four (and I was in the first group!) had read, the audience were invited to comment. Aleks Voinov, one of my dining companions from the previous evening) commented on the importance of authorial voice, and said very nice things about mine. Other people commented on the importance of originality (or of putting an original twist on a cliché); on getting straight into the story; on making sure the narrator’s personality shines through; and on making sure the reader is questioning and desperate to know more. The variety of pieces read was most impressive, and I shall have to track down quite a few of the new-to-me authors at some point.

After that, coffee and associated refreshments were served, and then I ducked out to the bar to chat with my co-panellists for the slot after next. That slot was ‘We’ve got the gay, what about the other letters — LBTQ?’ and starred me, Elyan Smith (LGBT fiction) and Lucy Felthouse (erotic fiction). We managed to cover all the letters, along with I (intersex) and A (asexual), and got a good dialogue going with the audience. The main problem seems to be in finding receptive publishers, and then reaching out to the prospective audience, with one constraint being that some publishers don’t want non-romance stories, and others don’t want GLBTQ protagonists in general. Positive mentions here for Riptide and Storm Moon as publishers who’ll take all the letters, and possibly there’s something new coming from Dreamspinner too? Hopefully we inspired people to think, and maybe sparked a few new story ideas, too. Apparently, I’ll be running that panel, or something similar, again next year!

After a smashing buffet lunch, I went down to the other room for the talk on tropes. We discussed those we like, those we don’t like, and those we’d like to see more of. It was a lot of fun, but had a bit too much of an m/m slant to it (as did some of the other general panels: it would be great to see more lesfic readers, writers, reviewers and publishers at next year’s Meet). [NOTE from Andi to our readers! Hint hint hinty hint lesfic folks! Here’s a venue for you to get in on in the UK!]

The final panel (of a sort) that I went to was the ‘Buffet of Banter’, where small groups got to talk over a variety of topics. An excellent idea, which I hope is repeated, even if my table did tend to stray off-topic.

The full panel listing can be found on the Meet’s website here, and there was definitely plenty for everyone split between the two rooms with break-out chats happening over coffee and in the bar at other times, too.

There was a good selection of books on sale, in addition to the freebies in our swag bags, and I managed to pick up two new books as well as selling two copies of my short story collection.

I’d also like to put in a rec for Ole Ole in the Lanes, who managed to feed 40 of us with splendid tapas after the Meet. Some of the others went on to a cabaret and then dancing, but I just returned to the hotel and sat up chatting with others of a like mind.

Next year’s Meet is in Manchester from the 12th to 14th of July, and I’m looking forward to it already, even though I still haven’t had time to fully explore the USB stick of extracts and free stories we were all given in our goodie bags. If you’re in the UK in July, or fancy coming over specially, why not join us? [NOTE from Andi: HINT HINT AGAIN!!!]
—

Born in Sheffield, England’s Steel City, and raised in a village on the boundary of the White and Dark Peaks, Stevie Carroll was nourished by a diet of drama and science fiction from the BBC and ITV, and a diverse range of books, most notably Diane Wynne-Jones and The Women’s Press, from the only library in the valley (sadly now closed and replaced by a van). After this came a university education in Scotland, while writing mostly non-fiction for underground bisexual publications under various aliases, before creativity was stifled by a decade of day-jobs.

Now based in Hampshire, Stevie has rediscovered the joys of writing fiction, managing to combine thoughts of science fiction, fantasy and mysteries with a day-job writing medical education materials and far too many voluntary posts working with young people, with animals and in local politics. Stevie’s short story, ‘The Monitors’, in Noble Romance’s Echoes of Possibilities, was longlisted by the 2010 Tiptree Awards jury. Other short stories have appeared in the anthologies British Flash and Tea and Crumpet, while Stevie’s first solo collection, A Series of Ordinary Adventures was published by Candlemark and Gleam in May 2012.

Stevie has a LiveJournal for writing updates, and promises to build a website in December if not before.
—
Thanks, Stevie! And to all of you, happy reading, happy writing.