A Journey to Publication by Jen Silver (Plus Giveaway)

Congratulations to Karen B.! She won a copy of Starting Over by Jen Silver.

Check it out! Author Jen Silver is with us today. She takes us through her creative process, from start to publication.

Be sure to check out the giveaway at the end. Details are there!

A Journey to Publication
by Jen Silver

I’m a late starter, always have been. 61 years old and I can’t quite believe that I’m sitting in my living room signing my first published book. And it’s not so much the fact of my age; it’s more the realization that I’ve actually done it.

Ever since I learned to hold a pencil and form letters I’ve written stories. And what happened to these stories? Well, they sat in boxes and drawers, some typed, some handwritten in small notebooks that I wrote in when I worked in London and spent hours commuting.

Then last year I was on the verge of retiring and having given in my notice at the start of the summer term, I had seven weeks to clear out files and leave notes for my successor. That only took up part of one week. So I started writing a story. The two main characters revealed themselves and I had a clear vision of where they lived. As the first chapter took shape a few more characters showed up. And that was it. This story was destined to sit in the drawer along with the others.

Life took over again. It was summertime. Playing golf, shooting arrows, putting some paint on the new internal doors in the house, visiting friends, taking a long train journey through France. But at the back of my mind a little voice was saying I should do something about these stories. So eventually (at least it wasn’t years later, only months) I decided to look at submission guidelines on publishers’ websites. The one that appealed to me was the Affinity one. Their guidelines state that they will get back to an author within sixty days. Most of the others had longer time scales. And at 60 years old I didn’t want to be hanging about.

One of the more complete stories in the drawer came out, got dusted off, and sent. To cut a long story short, they did respond well within the sixty days and said they were interested in the story but it needed some more work. Not unexpected as it had been written during numerous train journeys and put aside for twenty years. There were more positives than negatives in the initial response so I was encouraged to carry on. Eventually, after much consideration, they rejected this first story but said they would be interested in seeing anything else I wrote.

And this is when I went back to the story that has become my debut novel, Starting Over. It took several months to finish the first draft. At the time of the rejection of the initial manuscript, I had written three chapters, and I was stuck. This was the sticky middle, the tricky second act, that I had heard about from other writers.

So we went for a drive. My partner had just bought a new car, the same model one of the characters in the book drives. I told her I needed to put in more description about the main setting, the hilltop farm, Starling Hill. So we drove out onto the moorland above the town of Huddersfield in West Yorkshire. I took photographs on my phone. When I got back home I put one of these on my computer as the desktop wallpaper. (As an aside – my partner didn’t read the book until it was published. She asked me, as people do, if she was in it. I said, no, but your car is.)

Anyway this excursion helped enormously. I began writing Chapter Four and the story started to develop nicely. The characters found their voices again. The first draft was finished by the end of March. I was tempted to send it to Affinity then but my better half advised me to let it sit for a few weeks then go back to it.
Good advice. Because a few weeks later another voice wanted to be heard—a character who, quite rightly, thought they should have The Last Word.

During this hiatus I spent two weeks on an archaeological dig in Northumberland, near Hadrian’s Wall. I had booked this the previous year shortly after my retirement. Archaeology and Roman history feature in the novel and taking part in the dig helped me to flesh out some of the detail for the book.

I submitted the manuscript to Affinity and didn’t actually have long to wait before I got an email saying they wanted to publish it. We set up a Skype meeting – rather difficult to find a suitable time for everyone with one director in New Zealand and two in Texas, and me in the UK. Anyway during the chat they asked if I had any thoughts on the cover. I was still in shock realising that they did actually want to publish my book and hadn’t thought about a cover at all.

Then I remembered the photo – which was staring me in the face on my desktop. I sent this and it became the main image for the cover. There was still a lot of work to be done…acknowledgments, dedication, author bio, back of the book blurb, final cover design plus final edits and proofing. The team at Affinity is great and even working through time zones we managed to communicate well.

Now the work of promoting the book begins and instead of sitting writing quietly I have to put myself about a bit. Jove and Andi kindly offered me this slot and I knew it was too good an opportunity to pass up, although I’m not a natural blogger and I’ve found sitting down to write this harder work than writing the novel.
Giveaway time:
The first correct answer drawn out of the hat will be the winner and receive either a signed paperback copy or an ebook of Starting Over. 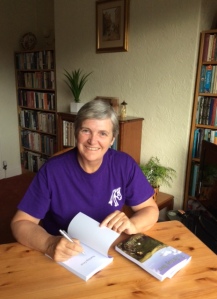 Jen Silver lives near Hebden Bridge in West Yorkshire, England with her long-term civil partner and, sadly, no pets (due to allergies!). As well as reading and writing, other activities include golf, archery and travel. Her first hand experience of an archaeological dig and interest in Roman history was the creative force behind her first published novel, Starting Over, released by Affinity Ebook Press in October 2014. Find out more about Jen by friending her on Facebook, following her on Twitter (@jenjsilver) or visiting her Blog.