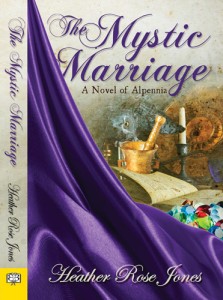 Congratulations to ULTRAGOTHA, winner of The Mystic Marriage by Heather Rose Jones.

Happy Sunday everyone! Author Heather Rose Jones is here with us again to talk about her Alpennia series. Bella Books just released the second book in the series, The Mystic Marriage. Want to check it out, along with the first book, Daughter of Mystery? You can totally do that HERE.

Also, to start your week off on the right foot, Heather is giving away an ebook copy of The Mystic Marriage. Yeah, that’s awesome. Drop a comment in the space below and I’ll draw a winner this Friday, May 8th.

There are several reasons why the Alpennian novels are set in the early 19th century. I’ve always been a fan of Georgette Heyer’s Regency romances and one of the seeds for Daughter of Mystery came from one of my favorite of her novels. The era stands at a bit of a cusp, balanced between the more libertine, freewheeling excitement of the ancien régime and the progressive, revolutionary, and modernizing movements of the 19th century. But another underlying reason was inspired by the research in books like Emma Donoghue’s Passions Between Women: British Lesbian Culture 1668-1801, showing that as early as the 18th century—contrary to the social constructionist view of homosexuality—women were identifying themselves in terms of their passionate relationships with other women, and developing relationships, networks, and communities centering around this experience.

This was a bit of an earthquake in terms of how I visualized writing lesbian historic fiction. I’d been making some initial stabs at writing fiction set in my favorite historic eras, which lean more towards the medieval period. But I found myself having a hard time imagining my characters seeing themselves as part of a tradition, a community. Each story seemed to be one of those “I must be the only woman who has ever felt this way” coming-out stories. And I found that wasn’t a story I was excited about writing. (Since then, my research has turned up a lot more information for framing my medieval characters in a more appealing way.) But in a late 18th/early 19th century setting, I could place my characters in a larger network of women whose lives and loves gave them context.

The idea of community—of networks and connections and relationships—is a major theme in The Mystic Marriage. Through no fault of her own, Antuniet Chazillen has found all her existing connections ripped away. In the wake of her brother’s treason (at the end of Daughter of Mystery), she has lost all her immediate family, her social rank and standing has been stripped away, those she considered friends have betrayed or abandoned her, and she is destitute. She flees the land of her birth swearing to turn the wheel of fate around once more.

When she returns to Alpennia, bearing an ancient book of alchemical secrets which will be the key to redeeming her family name, she faces the challenge of weaving the networks of support she will need to succeed. Fighting against her own pride and the consciousness of her change in status, she reaches out to bind patrons and protégées, teachers and students, lost friends and estranged relatives. And after having sworn never to let love or hatred cloud her judgment, she finds herself unexpectedly entangled in a desire that she doesn’t understand and fears to embrace.

All this is paralleled by the alchemical research that she hopes will achieve her goals. The purification and transformation of dross materials into higher matter echo her own trials, and the mystical melding of that matter into jeweled elixers mirrors the coming together of her patchwork community and the transfiguration of her own heart as she learns to embrace human imperfection and failure.

While Daughter of Mystery viewed Alpennian society from the narrow focus of the naïve, country-born Margerit Sovitre, The Mystic Marriage explores a wider and more sophisticated view of this world, from the Vicomtesse de Cherdillac’s circle of “eccentric” female friends, to the precarious ambitions of Antuniet’s young Jewish apprentice, to Barbara’s immersion in the politics of the court. But all these are woven together—friends, teachers, cousins, and lovers—into a fabric that can withstand the buffets of fate and malice and emerge whole and un-torn.

Heather Rose Jones is the author of Daughter of Mystery and The Mystic Marriage, the first two novels in a historic fantasy series set in an alternate early 19th century. Her short fiction has primarily appeared in Science Fiction/Fantasy markets, including stories in the Sword and Sorceress anthology series, and most recently a queer take on the medieval Welsh Mabinogi, published in both print and audio formats by Podcastle.org (http://podcastle.org/2015/02/20/podcastle-351-hoywverch/). She publishes an ongoing blog The Lesbian Historic Motif Project covering research of interest to authors writing historically-based lesbian characters (http://hrj.livejournal.com). Heather has a PhD from U.C. Berkeley in Linguistics and works as an industrial discrepancy investigator for a major biotech pharmaceutical company.