Pleasure of the Chase by Ann Roberts (plus a couple of FREE books!)

Congratulations to mattersoftheheart356 and Jacky! They both won a copy of Pleasure of the Chase by Ann Roberts.

Check it out! Ann Roberts came by to celebrate the release of her FIFTEENTH book. Seriously. That is certainly a milestone worth marking, yes?

And, because she’s the giving sort, she’s offering up two copies of Pleasure of the Chase–that’s the title of the new book–in paperback or ebook. Due to the insane prices of shipping, paperback is limited to the US only. Drop a comment in the space below and I’ll draw the winners on Friday, March 4.

Pleasure of the Chase by Ann Roberts 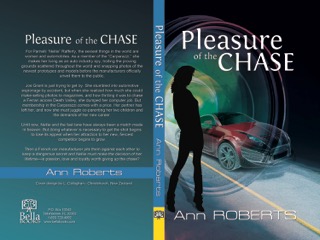 Picture this: you’re sitting at a red light one day, wondering if you’d really move to Canada if Donald Trump or Ted Cruz were elected president, when the oddest car you’ve ever seen pulls up beside you. It’s covered in black and white geometric figures, and if you stared at it for too long, you’d get a migraine. The driver notices you checking out the car (and her), and when the light changes, she hits the gas and screams away. You think, What’s her problem?

More than likely she pulled away quickly because she thought you were a member of the carparazzi, a group of industrial auto spies who trek around the world, attempting to take pictures and video of never-before-seen automotive prototypes. Like the paparazzi, these photographers sell their pictures to the trade magazines for lucrative paydays. Car enthusiasts who long to see the next great model and the new features flock to the magazines for these unauthorized pics.

My upcoming romance, Pleasure of the Chase, explores this fascinating lifestyle and the relationship between two members of the carparazzi, veteran photographer Nellie Rafferty and newcomer Jos Grant. Nellie is well known for her fierce competitive nature and her willingness to do anything to get the shot. Once she dressed up as a nun and infiltrated a convent that overlooked an Italian proving ground just to get a picture. However, trotting around the globe is tiring. Nellie has chased cars her entire adult life and is discovering her priorities are shifting.

Jos Grant joined the carparazzi after happening upon a prototype parked in a fast food lot. She sells a picture to a magazine and is hooked. Jos is a mom and getting the shot equates to putting food on the table. She’s a rookie, still learning all of Nellie’s tricks. She tries to be as ruthless as Nellie, or at least, she tries to live up to the legend that is Nellie.

Both have a love of the chase and soon find themselves drawn to each other while they compete for the same shots. Romance waits behind the camera lens and competition becomes more difficult. When a ruthless automaker manipulates both of them, they must join forces to prevent a dangerous car from being mass-produced.

One theme that surfaces throughout the novel is America’s love of automobiles.  Most of us have car stories—our first car, the family car we rode in for summer vacations, the first time we made out in a car, or a favorite make and model. My favorite car is the ’66 Mustang. I’ve owned two and I often reference Mustangs in my books. The picture you see here is my second Mustang. If you look closely you can see two of our dogs, Wylie, the World’s Most Relaxed Ridgeback, and Babe, a little black spaniel Many treats were used to cajole Wylie off the couch and into the car for this photo. 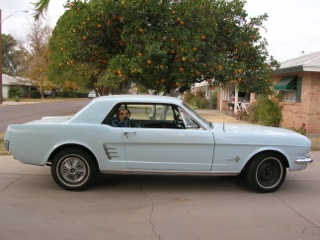 I inherited my first Mustang from my grandmother, and I have fond memories of tooling around Sun City with her, as she routinely exceeded the 15 miles per hour speed limit and scared the heck out of the golf cart drivers. Grandma was hell on wheels.

As we move closer to self-driving cars, there is talk that cars will become non-descript black boxes. We’ll board, sit down, and enjoy the ride. Some believe the days of choosing a color or a model are numbered. Car aficionados scoff at such talk, believing that a person’s car is an extension of personality.

What do you think? Will the automobile go the way of the 8-track? Do you have a favorite car? What are your favorite car memories? I’d love to know your thoughts.