Life Goals by Kate Christie (plus a FREE book!)

Congratulations to Cheryl H! She won a set of books from Kate Christie!

Check it out! Author Kate Christie joins us today and she’s giving away a couple of free ebooks! Yeah, she’s really that cool. Drop a comment below to enter the drawing for one ebook copy each of Training Ground (published in June) and Game Time (coming out next month).

Last week, my wife Kris and I donned our US Women’s National Team soccer gear and sat down with our three young daughters to cheer on our team against Sweden in the Olympic quarterfinals. Two hours later, Kris and I were hoarse from shouting at the television during a game that included two called-back goals (during overtime) and a penalty kick shoot-out, and the girls were watching us with wide eyes as we turned away from the onscreen melee of—spoiler alert!—Sweden celebrating their shocking win over the US. 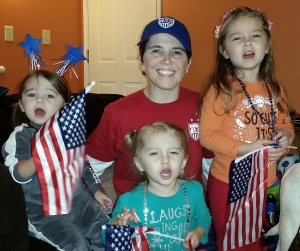 Kate and the girls cheering on the USWNT

“Wow,” Kris said to me. “I can’t believe that just happened. I feel empty.”

For those of you who aren’t sports fans, it may be difficult to comprehend how anyone could react that strongly to a televised sporting event. But to me, soccer isn’t just a game. It’s the outlet that got me through the most difficult periods of my life, the activity that introduced me to my best friends, the vehicle that carried me to this specific place and point in my life. Without soccer, I wouldn’t have Kris or our daughters, our house in the woods or our dogs, or even, possibly, my writing career. Without soccer, I may not even have survived.

Okay, so that last sentence sounds a wee bit melodramatic. As a Gen Xer I have long been trained to rely on irony and eschew sentimentality in all its spurious, supposedly intellect-weakening forms. But then again, as a writer and reader I privilege love stories with happy endings. Lesbian love stories, even. Obviously I’ve managed to resist cultural programming on a variety of levels.

Culture isn’t all that easy to resist, though, especially not for those of us who grow up knowing we’re different from most people. When I say something like “soccer saved me,” I really mean that as a gay, gender-nonconforming kid, soccer gave me a space where my body could propel me to success rather than merely function as an object of ridicule. Being a tomboy may not have been socially acceptable in other arenas, but on the soccer field my rough and tumble ways were encouraged. Later, in high school, sports provided a female-dominated atmosphere where I could be admired for what I did rather than how I looked or who I dated, both of which were problematic for little ole queer me. Even after I left high school and awkward adolescence behind, I continued to play soccer but in an entirely different setting. At Smith College, a women’s college in Western Massachusetts, being queer and an androgynous jock were not just tolerated but actively celebrated.

Book one in the Girls of Summer series

In addition to providing community and self-acceptance, soccer gave me a way to get out of my head. And as a survivor of childhood trauma, I definitely needed that escape. In my most recent novel, Training Ground (http://www.katejchristie.com/training.html) , the two viewpoint protagonists meet at a soccer tournament a few months after one survives a traumatic experience. Much of the novel explores the aftermath of trauma, both how it affects the survivor as well as how it impacts friends and family members. Like me, my character Jamie finds relief from anxiety and stress on the field, where her conscious self recedes and her soccer brain takes over:

Soccer did what it always did—took her out of her head and located her inside her body, where she became the action required of her in any given situation: sprinting, tackling, resting, passing, crossing, shooting.

More than that, the game allows her to feel strong and accomplished, in control of her body and of her future. Playing soccer brings her joy, a difficult emotion to conjure in the aftermath of trauma. For Jamie, soccer functions as a form of therapy as necessary to her recovery as the talk therapy sessions she attends.

Growing up, the only thing I loved as much as playing soccer was writing. Telling stories forced me to inhabit other people’s skin—even if my characters in the beginning were only thinly veiled versions of myself—and let me escape my anxious mind the same way that tracking down a breakaway did. It’s probably not a surprise, then, that Solstice (http://www.katejchristie.com/solstice.html), my first published novel from Bella Books, was about high school soccer players reunited a decade later far from their hometown. Soon after I penned the first draft of Solstice I decided to take a leave from my tech job in Seattle to focus on writing. A former college teammate had just become the head soccer coach at Mount Holyoke College and needed an assistant, so I returned to Western Massachusetts intending to enjoy a few months of soccer, writing, and the New England autumn.

In a case of life following fiction, that decision altered the course of my life. I fell in love with Kris, the aforementioned soccer coach, and didn’t make it back to Washington state for five years. By then Kris and I were legally married and talking about starting a family. Fast forward a decade and three children later, and I’m about to publish my ninth novel, Game Time (http://www.katejchristie.com/game_time.html), book two in the Girls of Summer series. My competitive soccer-playing days may be well behind me, but I have the writing career I always wanted and the spouse and family that, growing up, I never even dared dream of.

That lonely girl is still inside me, and I still sometimes turn to sports and fiction—both reading and writing—to escape the memories of trauma. But I believe that I have grown into a capable woman, wife, and mother, and I intend to keep writing queer love stories with happy endings. I intend to keep writing stories about broken, damaged girls and women who find their way to wholeness and family, love and light. Because in the end, that’s the journey we’re all on. Even the would-be cynical Gen Xers among us. 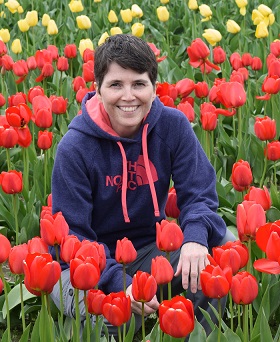 Kate Christie is the best-selling author of Leaving LA, Gay Pride & Prejudice, and Goldie-award winner In the Company of Women. Game Time, book two in the Girls of Summer series, is due out in September 2016 and is available for pre-order on Amazon. Sign up for Kate’s mailing list (http://eepurl.com/cbTpxz) to receive email notifications of her latest publications, or check out her blog Homodramatica (https://katechristie.wordpress.com/), where she writes about lesbian life, motherhood, and fiction.