Why Wonder Woman Scares Me by Lee Winter

With the new Wonder Woman film out this week, Lee Winter, author of upcoming lesbian superhero novel Shattered, considers modern kick-butt action women … and whether our heroines are ticking all our boxes.

I’m afraid of Wonder Woman. There, I’ve said it. To understand why, we have to warp back to the seventies, to cork heels, blue eye shadow, and blokes in unironic gray skivvies. Back to the Wonder Woman TV show starring Lynda Carter and her aura of overwhelming, non-threatening niceness.

The show, which ran from 1975-1979, was filled with dodgy sets and B-grade actors, and it also had an unintentionally funny feminist theme song with the words “In your satin tights, fighting for your rights…”

Each episode generally went along the lines of: Bad guys do bad stuff, usually involving chloroform and rope. Wonder Woman appears and deflects a hail of gunfire with her magic wristbands, then leaps about, smashing villains into assorted furniture, creatively but indirectly causing many a concussion. Her hunky military friend Steve Trevor would often be there, like a well-coiffed Ken doll, to look on in admiration. Finally, she’ll whip out her golden lasso, the villains will start monologuing, and the cops will rock up.

I never noticed the show’s schlock charms as a nine-year-old. My eyes were focused firmly on something else: The bit that came next.

“Yes we do,” she’d reply indulgently despite having done all the work.

There were variations on this. Sometimes Wonder Woman gave away the credit without any prodding at all. She was generous like that.

My juvenile sense of fairness was outraged. It was not enough that she did all the work but she couldn’t keep the kudos?

It wasn’t just her, of course. This was prevalent in TV back then: Women should be good but not too good. They should not outshine the menfolk. And, if you watched Hidden Figures, you’ll know that women, even 1960s NASA math geniuses, should not even think of taking their entitled credit, because that was simply not done.

I know many people loved Wonder Woman anyway. She was a feminist icon, the first female superhero—and it helped that Lynda Carter was (and remains) lovely, warm, and classy.

Recently I asked a Wonder Woman-loving friend about its appeal for her.

“Yes, I know she was an over-the-top male apologist,” she replied. “But it’s all we had in 1975. Look at all the shows with female heroes and lesbian icons today. Women and girls are spoiled for choice. But back then it was just Wonder Woman. So we took whatever they gave us.”

What they gave us is what the network allowed. I recall an interview years ago, which I wish I’d kept, where the show’s creator explained the pitch. The network was told, don’t worry, Wonder Woman might be a superhero but we will keep her, above all else, feminine.

That wasn’t for the viewers; it was for the men in their executive chairs who didn’t want to see any angry, hard-core feminist show shaking up the status quo.

It took two more decades before anything came along that to me felt completely unapologetic about its strong heroine. Xena: Warrior Princess (1995-2001). Now here was a woman who was deliberately, not passively, inflicting concussions, and was indifferent as to whether she was perceived as feminine. She had “many skills” and never pretended otherwise. Throw in subtext, bordering on maintext, between her and Gabrielle, and in the space of a neck pinch, it felt like the world had shifted on its axis.

When Buffy The Vampire Slayer (1997-2003) came along next, it felt almost revolutionary. Having the blonde, perky high-schooler, usually the victim, be the secret hero to save everyone? It was a big leap forward—as was her BFF, Willow’s, relationship with Tara.

Lost Girl (2010-2016) blew my mind. Bo, the other-worldly star of the show was beautiful, powerful, and not shy about her sexuality. She had a boyfriend and a girlfriend at times, yet neither relationship derailed the focus on the star or the show (take note Supergirl, Bionic Woman, and Once Upon a Time).

Pigeon-holed, constrained TV about women seemed like a shrinking dot in the rear-view mirror the day Bo bedded sexy doctor Lauren, in the hottest breach of medical ethics ever seen.

Despite some setbacks for strong women on TV, it’s still hard to comprehend how far we’ve come compared to what we used to have.

Movies have been much slower to catch up. Yes, they’ll often throw in a cool action girl, such as Trinity in The Matrix (1999) and assorted hero-universe movies, but she’ll usually never be the lead; she’ll be part of the team, there to support the male star/s.

Emily Blunt in Edge of Tomorrow revealed where the line in the sand was—she played an action hero who was brilliant, skilled, strong, and ten times more qualified than the male star (played by Tom Cruise). They solved this awkward anomaly by having her teach him everything she knew, so he could ditch her and be the hero.

That was 2014 and it’s been irritating feeling like we’ll never get true movie hero equality. By that I mean a movie with the following four must-haves:

So that’s what we need—all of this in one movie, exactly the same as it is for every male hero film. We can usually get some of the above, but never all.

It feels like I’ve been holding my breath forever waiting for this list to be checked. Wonder Woman’s silver screen debut, starring Gal Gadot, is on June 2. I’m excited to see whether this will be the one that will tick all the boxes.

I have one male friend who says we should just enjoy the movies and not focus on gender so much.

Easy for him. Male fantasies are well catered to. They can always find someone on screen who is exactly what they want to see. Exactly. Not just the best available. Boys will never know what it feels like to continually be served up a little of what you want but not all, so your stomach always hurts that little bit from disappointment.

I’ve watched all the Wonder Woman trailers. A couple of them are brilliant, following a fierce young princess to our world. However in one trailer I also couldn’t help noticing something. There’s Steve Trevor cracking jokes. Steve flirting, running, shouting, fighting. Steve, Steve, Steve. And, oh yes, Steve leaning in for a kiss. (Wonder Woman is confirmed as a bisexual character, by the way, not that you’d know it from the film.)

You might come away from this convinced Wonder Woman is a sizzling war romance—and the star’s girlfriend, Wonder Woman, also fights the Nazis with ever-daring Steve.

Of course that could just be selective editing and the movie could be a huge step forward. But in the back of my mind is nine-year-old me, looking doubtful, asking: Will Steve steal Wonder Woman, not just her glory?

I’m reminding myself it’s only a movie. Who cares? I’m too old to worry whether a female hero is sidelined in her own film. Too old to remember how disappointing it is when we get let down by TV and movies.

I don’t want to care.

But when I really sit back and look at it, I’m shocked to find out that I actually do.

And that’s why. Why I’m afraid of Wonder Woman.

Award-winning author Lee Winter has written Shattered, out on June 7 at Ylva, which tells the story of a black, lesbian superhero who refuses to “hero” any more. 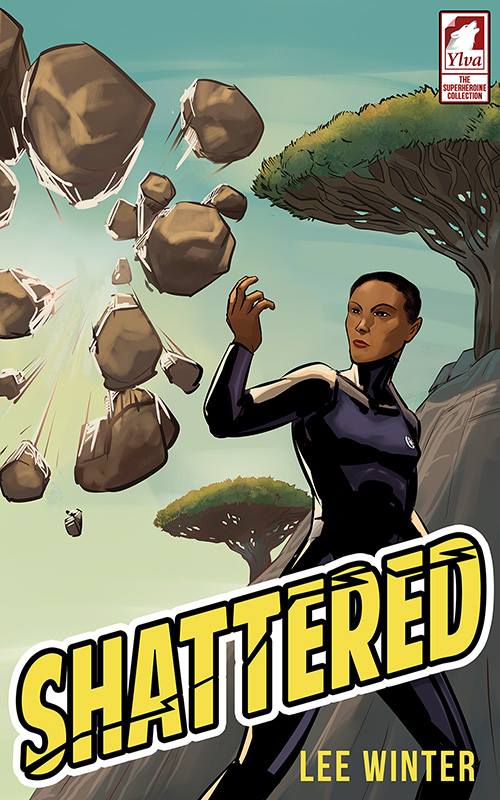