Introduce yourself to the rest of the class. Who are you and what makes you tick?

Hi, I’m Sally and I live in Birmingham in the UK with my wife and four-year-old daughter. When I’m not writing, I am a communications professional in Higher Education. I’m passionate about coffee, good stories and creativity.

What does it mean to you to be an author? What makes a writer a writer?

For me, it is the one thing I do solely for myself. I wedge it in between family life, my career and every day chores. I have always told stories, whether factual or fictional, right back to when I was a child. For me, writing is simply a medium for telling a cracking story – something that I applied to my first career, which was in journalism, and now to my fiction writing. It is a means to an end. If when you get a great idea, your natural instinct is to write it down, you are a writer.

Are you promoting a specific book? Tell us about it. Include the book blurb if you’d like.

I’m promoting Her Shadow at the moment. It came out in November 2017 and is a story I’m really proud of. It follows two women as they navigate a world of tabloid headlines, politics, community, prejudice and love. I wanted it to be a page turner, an easy read, and thankfully the reviewers have come back with that feedback. You can download it or order it in paperback from Amazon.com.

Check out the blurb on the back page:

Cameron Strawbank’s job as a high society fundraiser finds her wining and dining the great and the good. Following a five figure donation, her professional and personal life collide with dramatic consequences when she finds herself in bed with a prominent politician. Sara Lorenzo is a well known shadow cabinet minister, and what begins as a fling, becomes a relationship that surprises both women. Before long, the tabloid press discover their affair, and its apparent link to cash, and lurid headlines follow, forcing the couple apart. Sara prioritises safeguarding her career and Cameron is left with her working and personal life in tatters, and flees the country with an old flame.

Cameron’s desire to find out how Sara really feels about her, brings her back to the UK, despite the guilt she carries. Is there any chance of a future together? She attempts to rebuild a career, and forge a new connection with Sara when tragedy hits in the form of a suspected terrorist attack in central London.

This is a story of love, loss, friendship, adventure, politics and forgiveness that will keep you guessing to the very end.

Tell us about your biggest guilty pleasure. For example, to you sit naked in your pantry in the middle of the night and eat Nutella with your fingers?

It has to be watching Casualty and Holby City. They are the only soaps I indulge in, and I am utterly faithful to them. I worked for many years in the NHS, so spend part of almost every episode shouting at the telly, pointing out inaccuracies. That said, the scripts are often remarkably well crafted. It’s easy to be sniffy about that kind of production, but to my mind, this is every day storytelling in the same way Charles Dickens produced the Pickwick Papers over 100 years ago.

Tell us one thing that you’re passionate about. For example, would you strap yourself to an oil rigging a la Lucy Lawless with a Greenpeace sign in your hands?

I am absolutely passionate about kindness and tolerance. I have occasionally in my life faced injustice and prejudice, and thankfully received positive support. Not everyone has that advantage. After the protests by the far right in Charlottesville in the US earlier this year I sent a small donation to an LGBT youth group in that town, to let them know they were not alone. I was very moved to get a personal note back in the post thanking me for my support. Even the smallest gestures matter and we can all make a difference.

What’s your writing process? That is, do you have a particular place you write and/or time of day? Do you have any particular things you do before you write? (e.g. do you listen to music, drink coffee, take dance breaks…)

The best place for me to write is anywhere that isn’t at home. My daughter brings me joy every day, but as many of you will know, a four-year-old is not conducive to peace and quiet! I love taking my laptop to a café near my home and getting an hour of writing done over a coffee. Little and often works for me. I can’t work for hours on end, but if I can shoehorn in even 20 minutes a day, I feel like I’m making progress.

I once drummed for a band called Pussy Galore. Yes, really.

Is there a book by another author that you wish you had written?

So many! But I guess if I had to pick one, it would be Rebecca by Daphne Du Maurier. Wonderful melodrama!

If time and money were no problem, where would you most like to go in the world?

I’d love to explore Scandinavia. I couldn’t tell you why, but since I was a child I’ve always been fascinated by that part of the world and would love to visit.

And finally, what sorts of writing projects are next for you?

Great question. I am torn between writing another novel – perhaps even a sequel to Her Shadow, which some readers have suggested – or trying my hand at scriptwriting. Some of the best writers at present are writing sit coms – think about the scripts for The Thick of It, W1A, Catastrophe. They are so clever, so real, so funny and yet feel natural. I’d love to write something like that, although I suspect I’m in for a steep learning curve. 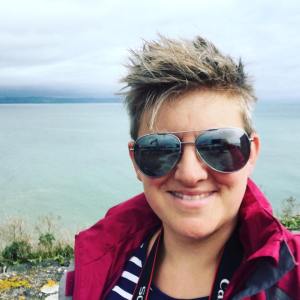 Sally Xerri-Brooks is a British writer, based in Birmingham in the West Midlands. She writes when she’s not working, parenting or drinking tea. That said, she also drinks coffee, and drinking and writing are not mutually exclusive…

Sally has, to date, written two novels, the most recent being Her Shadow, released in November 2017. She’s passionate about creating characters that aren’t always represented and telling stories that aren’t normally told. It’s said ‘you can’t be what you can’t see’ – Sally hopes people will see themselves in what she writes.