So, what goes on in Vonnie-Land when I’ve finished a paranormal book I’ve been working really hard on?

Well, kick on back and I’ll tell you.

As some of you might know, I’m an Empath – and if you DIDN’T know that – here is a link to the blog where I introduced myself to Women & Words. Yes, right HERE!

I’m also a ghost magnet. I can’t “see” full-bodied apparitions – but I know they’re there. I get mental pictures of whether it’s good or bad energy, female or male, and sometimes what they’re wearing.

I can touch things and get a picture of who owned the object. Same thing with some walls.

Every once in a blue moon – I can tell a loved one something about a person who’s passed on – and what they’re wearing…. LOL – I’m SO not a fashionista, so that ability is pretty funny if you think about it.

Any-way – my point being and what it all boils down to is that I can tell if there is spiritual energy around me.

So, back to my question – what have I done for fun this last week?

The other day, I had been watching a Youtube video – and the guy mentions a ghost app. that you can download and tell if there are ghosts in the vicinity with a built in “ghost box” where supposedly ghosts can manipulate and use the words in the app’s library and “talk” with you.

I’m not going to lie, the idea made me more than a little nervous. I may know ghosts are around, but really the only one I WANT to communicate with is my daughter or another late family member or friend who may want to show their love or knock around a few things to let me know they’re “there.”

With me so far?

Curiosity won. I was going to download and try it despite the overly dramatic voice in my head telling me I didn’t want a open channel – ever hear of bad Ouija Board experiments? Or maybe you’ve heard of The Exorcist?  I cannot express accurately how much I was traumatized by that movie and some of the stories I’ve heard about them. Not to mention my own brushes with the dark side of the paranormal.

Yes, that’s what my head does… *whispers* “Welcome to Vonnie-Land.”

Still, after I argued with myself about how ridiculous THAT sounded. (It’s a freaking phone, Yvonne!) I downloaded the app.

Are you laughing yet?

The first night I used it, Sandy and I were sitting in the living room watching the radar and the “dots” representing spirits around us.  I’m gullible but not THAT gullible…

I didn’t “feel” anything at all but that didn’t mean it didn’t give me a few chills, right? Then all of a sudden, the word “carpenter” came up. That gave me a start, because how would it know Sandy was one for years?  Unfortunately, I didn’t think to take a screen shot of that particular oddity.

The next day, for fun – I decided to download three of the highest rated apps recommended by “professional” ghost hunters and put them to the test by sitting in the same spot and comparing the three on my Samsung. Don’t ask me about the numbers – the explanation the app gives is over my head and wouldn’t mean anything to me anyway.  Ha-ha! Red means strong, Blue is weak, and yellow is weaker still.

Here is what happened.

In this shot, evidently there is a strong spirit just to the side and in front of me – and it popped up with the word “Sum.”

I didn’t feel any spirit energy but I do find it interesting that at the time, Sandy was in the office doing our taxes.

Right after that – I tested this one: Which also states there is a spirit next to me and these are the words that came up. I guess I’m supposed to put them together to mean something. (Aside from not being able to read one of the words) I came up with a sentence “We’re all around you.” If you can come up with something else, please leave a comment. I’m horrible a word games! What’s interesting about this one – it’s a child – a Gemini- as is my late daughter, Dezi. What I hate is that it’s telling me she’s scared.

And another example of the same app.:

Now, there is a poltergeist (!) on the other side of me who’s peaceful. (Isn’t that an oxymoron?) Again, if you want to help me, please put the words into a sentence I can understand.

I have a couple more of these screenshots – all are listed as different kinds of spirits and all have different words to play with but for the sake of space, I’m using only a couple. 🙂 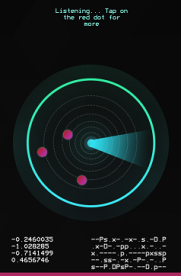 On this next one over here on the right – evidently I’m having a party! If I hit the dots, it tells me what “kind” of spirits around me.  I couldn’t get a screen shot of them but they were: poltergeist, a woman, and a lady in white….  And each time I hit scan, I got different hits around me and the same kinds of spirits. I don’t know how this one rated a 4.5 – unless it’s a children’s app. I kind of was expecting a Bloody Mary. Ha! 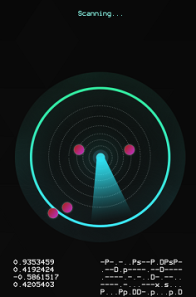 All of the tests were done within a half hour of each other and in the same exact spot.

Do I believe it? As much as I secretly wanted them to work – they didn’t and  I just wanted to have a little fun with it.

These apps would have me believe I’m the most haunted person in Texas.

Have a great day and let me know what you think about the whole business or if you’ve tried these at home kids!

See you next month!