OMG it is another fangirl freakin’ Friday! And I hope that you are finding things that make you laugh and give you life and all the feels. I’m on my, like, 37th childhood (or maybe I never actually left childhood…hmmm) and I love me some fangirling over various things. I don’t just fangirl over movies, comics, TV shows, and books. I fangirl over other things, too, and so today I’m going to give you my current fave 10 things I’m fangirl bananas for, in no particular order (WHICH OF COURSE MAY CHANGE TOMORROW AND YES WYNONNA EARP IS A PERENNIAL FANGIRL FAVE BUT THESE ARE SOME OF MY OTHERS KTHX). And yeah, tell me in the comments what YOU’RE currently losing your fangirl shit over! Let us fangirl together 4-evah!

UNO!
OLYMPICS, OF COURSE! Holy hell I love me some Olympics. And for reasons I do not fully understand, I love me some winter Olympics more than summer Olympics. Currently, I am so stoked about Olympics 2018 with Chloe Kim (I love to watch snowboarding, you guys) but WOW Adam Rippon on the ice! And I rooted for Yun-Sung Bin in skeleton. That dude…damn. DAMN. And Mikaela Shiffrin! YEAH! Also, how cute is Ava Samkova with her good luck mustache painted on during snowboardcross? 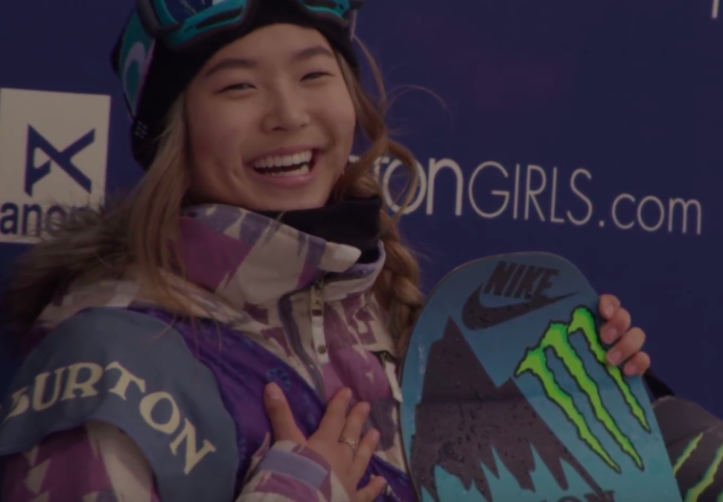 DOS!
BLACK PANTHER. People. I have been waiting to see this movie since it was barely a whisper emanating from Marvel Studios, borne on the breezes of comics greatness. I’m slated to see it today (for the first time) and I will most likely tell you all about it afterward because YES.

I’m not going to go into how not only is this an awesome story, but also an amazing testament to representation because those are convos for another blog. But right now, suffice it to say, ABOUT FUCKING TIME.

link
Also, music. Off the chain.

TRES!
LEGENDS OF TOMORROW! Friends, I FINALLY managed to get caught up so I could start watching Season 3 in real-time with everybody on the CW. If you’re not familiar with this show, NETFLIX NOW, people. NOW. RIGHT NOW. Time traveling misfit crew and Sara freaking Lance, played by Caity Lotz (who will be at ClexaCon so don’t say I didn’t tell you). It is probably a scientific fact that you will crush out on Sara freaking Lance at some point during this show. Let me help you.

Quirky, fun characters. Time Travel. Drama. Queer rep. WHAT IS NOT TO LIKE HERE?

CUATRO!
BLACK LIGHTNING! Another win so far for the CW that just launched about a month ago. I’m really enjoying the characters, storylines, and music in this series, which brings to life Black Lightning, who debuted in 1977. He was a response to Marvel’s Luke Cage, Black Panther, and Black Goliath. God help us, DC, because the only other concept they had for a black hero was — I shit you not — a superhero called Black Bomber who was a white racist who turned black under stress. Let us all thank whatever deities there are that this never came to pass and that Tony Isabella, Black Lightning writer, was able to convince DC what a truly horrible idea this was and to kick this flaming train of terrible right off the trestle into the canyon.

Anyway, Black Lightning is a high school principal who is also a metahuman and has electrical powers — he can shoot electrical bolts like freaking Zeus and it’s all kinds of awesome. He stopped being BL for 9 years because his wife was all, WTF, dude? You have daughters! A life! And here you are half dead every night! So he gives it up but eventually starts coming back to it because the gang The 100 is making crap go south in the neighborhood. In the midst of this, his daughters are discovering that they, too, have powers. They don’t realize, though, that Dad is BL. Anyway, Thunder, the oldest daughter (Anissa), is also lesbian, and omg it’s so refreshing to see how her family accepts her and how they talk about all kinds of issues and how the show addresses current events…I’m loving it.

CINCO!
QUESTIONABLE CONTENT WEBCOMIC! This one I have to blame on colleague and fellow writer Lise MacTague, who is also my co-host for the Lez Geek Out! podcast. Dammit, Lise!

This webcomic was launched in August 2003 by Jeph Jacques (jacks), who has been posting regularly, like, 3-5 times a week since then and is one of the few webcomic creators to make a livig at it. QC follows the lives, dramas, and relationships of a group of friends who are really diverse in terms of sexual orientation and gender identity, race, class, and background. A couple deal with addiction issues while another struggles with OCD. But it’s so much fun watching them come together as friends and lovers, and so interesting to watch them work through issues (or struggle with them). And there are robots. But trust me. This shit TOTALLY works. I binged the archive in a couple of weekends, but Lise has a good suggestion. Click on “random” on the page and that’ll bring up a random comic from the archive and then just go forward or backward from there to see if you dig the storyline. Or be like me at start at the beginning and tear through it. Whichever.

Damn you, Lise. I’m now a QC regular! And fear not, Lise and I fangirl about it on the podcast soon. Stay tuned. 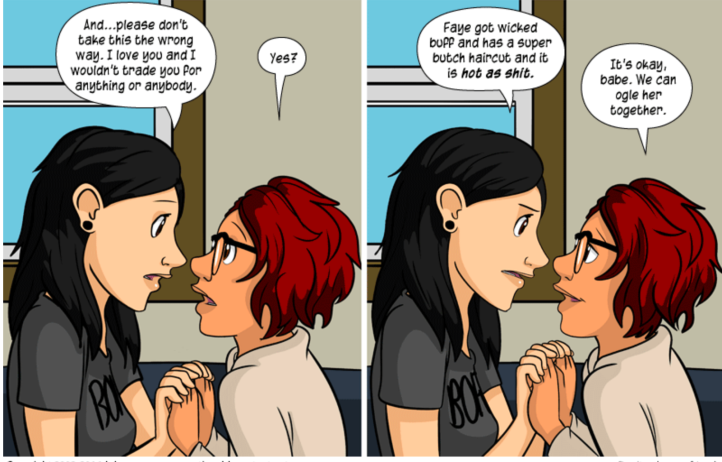 SEIS!
CLEXAWEEK 2018! What the hell is THAT, you ask. It’s literally Clexa fan creatives week on Tumblr, which begins February 25 and goes through March 3. There are different prompts for each day. Guidelines are flexible. Write a one-shot. Short story. Novella. Do fanart. Fanvids. Poems. Or whatever. Post the whole thing or installments or whatever the hell. Super-fun prompts and people get super-creative with this. AU, canon-verse, whatevs. Specify the prompt you used (there are hashtag guidelines) and post on Tumblr.

Check out the guidelines HERE. Includes themes for each day and prompts.

SIETE!
SPOTIFY! omg, whatever. I dig a commercial streaming venture like this. Many of you know I’m a music fanatic and Spotify is actually a pretty decent way to find new music and get schooled in old. I do pay for the premium service, which is about $10/month, but I write to music, so I use it all the damn time. I also have a Sonos wifi speaker in my office that is the total shizzle. I bought the midgrade, and highly recommend it.

You can make your own playlists in Spotify (premium), share ’em or not, and have all kinds of other songs in your primary library. It’s also fairly intuitive and picks up on the types of music you like so it’ll give you a weekly playlist on Mondays called “Discover Weekly” that you can cruise through. I really dig those. I’ve found some sweet-ass tunes that way. They also have all kinds of moods/genres you can browse and if you like one band/musician, they’ll offer others along those lines you might like.

I also do Soundcloud, and have some faves there that I listen to. I found Shura that way and I freaking love her. Also have a listen to “Closer,” by Made in LA. I’m really digging it.

OCHO!
tello FILMS! I found out about tello at ClexaCon 2017, when I was tapped to moderate a panel on queer lady business. I am rather embarrassed that I was unaware of the awesome that is tello, which produces and distributes high-quality web series with a lesbian focus. I met Christin Baker, founder and CEO, at that panel and decided this is the future. So I subscribe to tello, which offers you a more content than if you didn’t subscribe. It’s $55/year or $5/month. I’ve found a few fave web series as a result and oh, hey, lesfic writer Geonn Cannon’s Riley Parra series is being adapted and the first season is available over there! Riley Parra is a paranormal detective series. How can you NOT dig that?

NUEVE!
FANGIRLSHIRTS DOT COM! Or, in local parlance, fangirlshirts.com. “Awesome shirts by, for, and about women.” If you missed it, I had the great fortune of interviewing the founders and entrepreneurs behind this amazing endeavor, Sally and Rebecca right here on Women and Words.

FGS is literally embedded in my current fangirl life, and I’m pretty sure I’m funding their retirement (I’m currently wearing a Clexa shirt from them). FGS donates some of its profits to organizations that benefit girls and they are such community-minded spirits that there is probably nothing I wouldn’t do for them (and if they’re reading this, they might just find something for me to do…). I don’t think I can quite explain the awesome that is FGS, so just run over to their site and check out the wares and the blog and you will see how they are working with various fandoms and fans to create awesome and share the luv through various shirt campaigns or giveaways. Those are some of my fave things. LOVE YOU GUYS, FGS!

DIEZ!
THE ALIENIST! Yeah, I know. It’s a TNT adaptation of Caleb Carr’s 1994 novel (which I read), but I love what they’ve done with the place, if you will. This just started airing late last month. It’s the late 19th century, NYC, and an “alienist” is basically a psychoanalyst during an era when people were way leery of that sort of thing. He’s trying to figure out who’s murdering teen and ‘tween boys — gender-nonconforming and possibly trans (though at the time, there wasn’t really language for that). His crew involves a newspaper illustrator, a wealthy young woman who works at the police station (no doubt her money helped her get that position), and two Jewish detectives. They’re a motley crew, indeed, and the show delves into prejudices of the time, political intrigue, and absolutely gorgeous sets and costumes that evoke the era in all its horrible glory.

I live-Tweet this show (along with the other shows I watch) and have had some cool-ass interactions with the official Twitter account of the show and some of the other people watching it, including a fellow Clexa fangirl. It’s hella fun, the writing is tense, characters are gripping, and the sense of dread as they try to get inside the killer’s head to figure things out in this era of nascent forensic analysis is really cool.

And…there you go. Some of the things that are bouncing around in my head at the moment. Share yours in the comments.

Happy Friday and may The Force be with you.