The moral of the story…

So a couple of weeks ago, I was in Portland, OR to attend an event called The Portland Lesbian Writer’s Guild Presents Readings of Rapturous Romance and a Bountiful Book Faire (boy that’s a mouthful!) and then help Lori Lake move to a new house. I was so excited to bail my behind out of Minnesota because we were going to get nailed with another huge snowstorm, and the day before I left it was -2. We’ve had quite a cold snap of some twenty days below zero, and I was D.O.N.E. Done. SOOOOOOOO freaking done.

So I landed on Saturday night, and I awoke Sunday morning bright and early about eleven, (yeah, that’s pretty bright and early for me) and guess what? The grass was green, leaves were budding, and there were FLOWERS! But it was getting cold. Okay, maybe thirty wasn’t all that cold, but still, I was looking forward to at least sixty.

We got all loaded up with books and giveaways and snacks, and headed for the venue. The skies decided to open up and instead of the ubiquitous rain Portland is so well known for, it starts SNOWING. Yes, white clumps of wet crap fell from the heavens like fairy glitter.

So, we hauled everything in for the event, which was a lot of fun. I had a chance to help with the raffle of an awesome basket of books and other goodies:

There were a whole bunch of amazing authors there, including the amazing Linda Vogt and the always delightful Jove Belle! Isn’t she cuteeeee?

The event was really well attended, even with an increasing amount of snow dumping itself on the city. Apparently when it snows in Portland, everything comes to a screeching halt, people swarm the grocery stores in case they can’t get to a fast food joint, and school gets called off. Who knew? I come from the frozen tundra, where if we get six inches of snow and blizzard conditions, school starts two hours late. Once the snow is done, give us a day and almost all the roads are cleared and passable. Anyway, back to the snowy event… 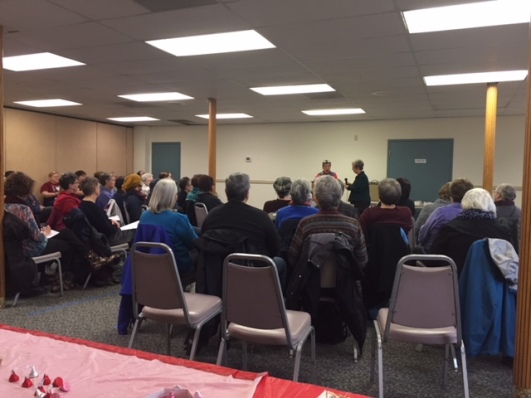 Almost all the chairs were filled! Sandra de Helen (on the right below) made the trip up from California, too, and here she is hanging with Lori Lake (on the left).

After the event, we headed home, and it was time to start packing. The movers were coming on Wednesday, so we needed to make sure Lori was boxed up and ready to roll. I had to admit it was a little daunting when I realized Lori’s library was still full of books and it was with no small amount of panic I saw her writing office hadn’t yet been touched because she needed to wait until the last minute as she worked on various business and writing stuff. 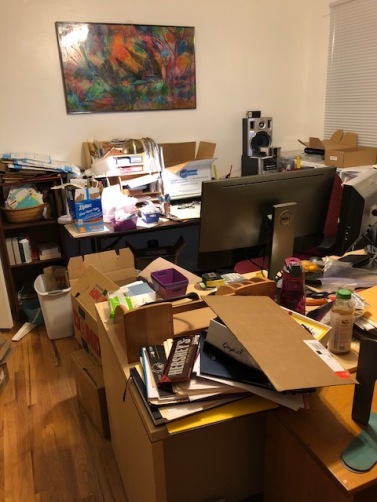 And we all know the best thing to do for a writer is not to mess with their desk! So I told Lori to work on that while I tackled the shelves in her office.

Boy did I go through a whole lot of packing tape! 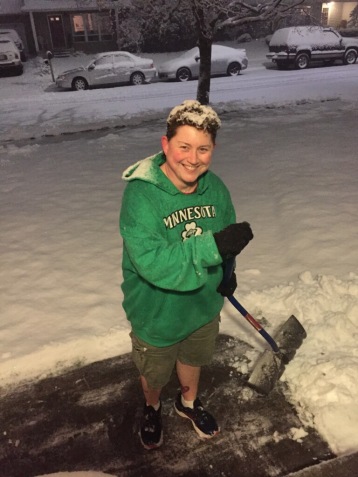 OMG!!!!! It looked like Minnesota! I did not like this one bit. The white crap followed me all the way to Oregon! BOOOOOOO! So, after shoveling and then scraping the white crap out of my hair, we finally hit the hay. The next morning, I got up, and we played Groundhog Day. More snow and more packing. Finally we took a load over to Lori’s new digs, which is pretty damn coolio.

I’m a foodie, and I love trying new grub. I know you’re wondering how this applies to the tale I’m dragging you on, but bear with me. Portland is the Queen of Food Carts. I LOVEEEEE food carts. I really, really love Puerto Rican and Cuban food. So imagine my exhausted excitement when I saw THIS!!!!!

I made Lori turn around and go back to the five cart lot, because my mouth was already watering. I was going to score me some Ropa Vieja, some yuca, maybe some tostones. She barely had the car stopped when I scrammed out the door and hoofed it across the parking lot with my hand stuffed in my pocket feeling around for some cold hard greenbacks. I get to the cart and…yeah. You guessed it. Closed up tight, probably because snow was dripping from the roof or something. Off I slunk back to the van. However, my intrepid readers, have no fear, I kept my belly full of other goodness. So it was back to lugging and packing and lugging some more. Finally the shelves were empty!

Or mostly empty. And look at the progress Lori made on her desk! Anyway, after lots more packing, taping, and hauling, Wednesday finally rolled around and it was time to go get the U-Haul. I’m happy to report we got everything boxed up in the nick of time. 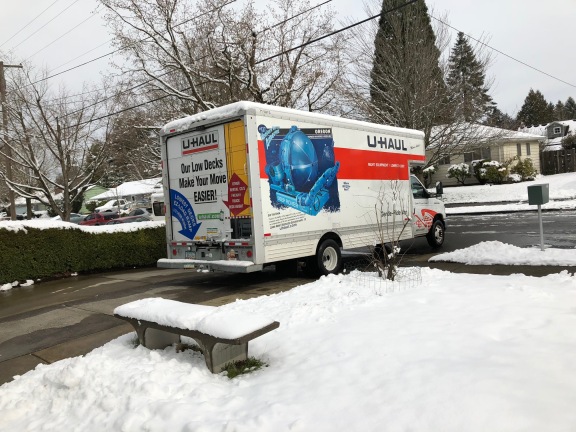 I’m also happy to say I didn’t hit anything backing into the driveway.

And the white crap? It wasn’t melting.

But the movers showed up and did the heavy lifting, for which we were all eternally grateful. After two trips, almost all of Lori’s worldly possessions were at her new Fortress of Solitude.

Oh, happy day!! We spent the rest of the night moaning and groaning about our aching bodies while at the same time being extremely proud of ourselves for pulling the impossible off. This could make an awesome story!

Finally, it was time to fly home. After I missed one big snowstorm, the temps had bounced  into the 50’s, which is unseasonably warm, but highly delightful. So I thought I was going to arrive to some nice weather, and I was almost giddy with anticipation. We landed, and I got off the plane into this: 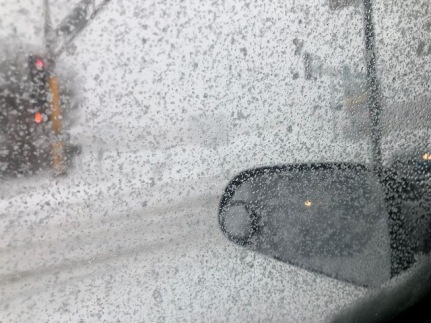 What the H-E double hockey sticks???????? When I left Portland, it was in the low forties, and I arrived to seventeen and nine-and-a-half inches of snow. The white clumps of wet crap dogged my ass. And instead of a two hour late start for school, the kids wound up with a snow day.

So what’s the moral of this story? I think it’s stay far, far away from me in the winter if you know what’s good for you!