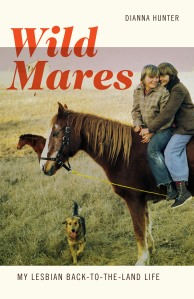 My memoir, Wild Mares: My Lesbian Back-to-the-Land Life, tells the story of a working-class tomboy in North Dakota who discovered the women’s movement nearly five hundred miles from home. My story is both personal and political—as you might expect from a dykeling who came of age during the Second Wave of feminism, which we called Women’s Liberation.

My friends and I grew up in the era of Mad Men and the nuclear defense strategy known as Mutually Assured Destruction. We had no choice but to fight against big odds and deep oppression. Women were systematically undermined, harassed, and virtually barred from most of the trades and professions. Somehow we found our way to half a dozen lesbian farming projects where we planned to create patriarchy-free zones in which we could love and support each other and become our truest selves.

Like most DIY work, we made it up as we went along. In my college classes I encountered no books by women until I put myself through an independent study course on feminism and discovered Simone de Beauvoir and the vast outpouring of Women’s Liberation writing. After that, as a student, I taught a course on feminism, and my friends and I started a consciousness-raising group. We talked, listened, argued, and learned about privilege and oppression. Before CR, we had marched and demonstrated for racial justice and against the Vietnam War. After CR, we still worked for those issues but also for women’s rights and lesbian rights. We had no words for intersectional feminism, but we were preparing the soil for it, and we were so damn beautiful, brave, and insightful that we couldn’t get enough of each other’s company.

I came out in 1971, and the next thing I knew I was nearly seventy.

Writing a memoir brings the past to mind simultaneously with the present. It forces you to time travel through multiple periods of your own life and make sense of what you’ve learned. You talk to friends, sort through their perspectives alongside yours, notice the circles around everyone’s eyes, and realize that memory is funny stuff—all memory/wemory—to paraphrase Dr. Who on the nature of time. Like digital files, memories degrade. Even variables like how and when we retrieve the memories can affect what we remember, so I’ve include memory’s weaknesses, as well as its powers, in the story.

I can say this much for sure: My friends and I took the words women, lesbians, and dykes and made them our own, much as people of color and queer- and trans-identified people have found ways, and then taught the rest of us, to acknowledge their own empowering, self-affirming identities and language. In a time of extreme misogyny and homophobia we learned to love ourselves and make spaces where we could enact our dreams. The Lesbian Resource Center and Amazon Bookstore in Minneapolis were two of those spaces, but some of us needed land. We needed to love women, live with animals, grow our own wholesome food, take care of the Earth, and slip the grip of the Man in every way possible. Faced with violence and hate, we seeded ideas and hard work, and I think there’s a lot to be learned from it in the age of Trumpian bluster and boondoggle.

Dianna Hunter is the author of Wild Mares: My Lesbian Back-to-the-Land Life published by the University of Minnesota Press in 2018 and of the book and radio series Breaking Hard Ground: Stories of the Minnesota Farm Advocates. She has taught writing and women’s and gender studies at four universities, including the University of Wisconsin-Superior, where she was a lecturer and director until she retired in 2012.

Link for more information at the University of Minnesota Press website: