So this week I’m smdh over last week’s episode of Fear the Walking Dead, which was the S4 mid-finale. And I am still pissed. Why?

Oh, and SPOILERS BELOW, Y’ALL! THAT THERE IS YER WARNING!

Killing off (needlessly) a strong female lead and, frankly, ageism. AND THAT IS A LOAD OF STEAMING POO.

But, first, let us get some context.

For those of you who have been following the series, you know it’s part of The Walking Dead ‘verse. FTWD started its season 1 in Los Angeles, before the mysterious disease outbreak that would eventually create zombies, while TWD pretty much focused on what happened after the initial stages of societal breakdown (plus it takes place across the country, in Georgia). 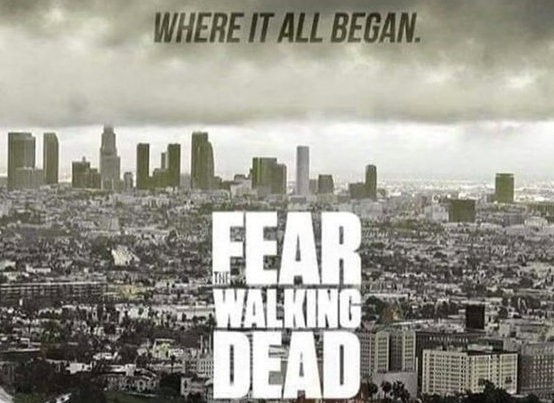 I personally think FTWD dragged the first two seasons, but I did appreciate the cast and watching how they attempted to deal with that societal breakdown, and thinking back on it, it’s been an interesting evolution of each character as they become apocalypse survivors.

And, okay, I had a total fangirl reason for watching FTWD — I followed actress Alycia Debnam-Carey from The 100, where she played the iconic warrior Commander Lexa. ADC plays Alicia Clark in FTWD, and she and her mom, Madison (played by the fabulous Kim Dickens, who I’ll be discussing in a minnit) and her brother Nick (the wonderful Frank Dillane) and her mom’s partner Travis (Cliff Curtis) navigate the circumstances of their new world, meeting people along the way who become part of their crew.

They head south to Mexico, then back north, and finally, in S4, they’ve taken up residence in a Texas baseball stadium, where they’re trying to make a go of survival with a few others.

And that leads me to my WTAF, FTWD rant.

In the S4 mid-season finale, FTWD killed off one of the primary characters in the show, Madison Clark, who was one of the series originals. That is, it was confirmed that the character was dead. Given the way the season was filmed, with parallel past/present timelines, viewers don’t find out for sure that Madison is gone until the midseason finale (though bunches of us suspected/dreaded it).

She joined Nick Clark, who died in the S4 opener. Nick’s death was a shocker, but Madison’s death brings up a whole host of issues with regard to representation and women. And that’s why I’m still pissed about what happened to her character, and why a little background might be in order.

Madison became a leader of this particular band of survivors, and she worked to keep her family together — tensions between her and daughter Alicia surfaced because Nick was a drug addict prior to the crazy, and Madison had invested a ton of time and energy into trying to keep him safe and help him get and stay clean before everything went to hell. That dynamic — Madison spending most of her energy dealing with Nick and kind of ignoring Alicia — plays out in the apocalypse, and watching Madison re-negotiate the terms of her relationship with Alicia over the first three seasons was beautifully done, by both actresses.

And it was SO FREAKING COOL to see Madison, a former high school counselor, morph into MADISON, BADASS MOM OF THE ZOMBIE APOCALYPSE through the 4 seasons of the show. I mean, when do we actually get to see that? An older woman with grown kids who is a FREAKING BADASS and will do literally whatever the hell it takes to protect her kids and, by extension, others who end up in her makeshift family during these craptastic times?

I had my issues with the character of Madison, and that’s testament to Dickens’ fine acting chops (some may know her work in Deadwood and Lost), but by the end of S3, I was Team Madison all the way, and I loved the subtlety Dickens brought to the role, as we watch her make lots of mistakes but eventually find her groove.

She was FTWD’s Rick Grimes, and that thus brings me to the uncomfortable observation that had Madison Clark been a dude, would she still have been killed off? I mean, Rick Grimes has been going strong through…what is it now? 8 seasons? of TWD. He’s basically untouchable.

I watched the episode of Talking Dead after the S4 midseason finale of FTWD aired (TD is the talk show that airs after each episode of TWD and FTWD; it brings on actors from the show and other guests to unpack the episode) and Kim Dickens was on the episode, and said that she was heartbroken that the new showrunners (both dudes, incidentally, and a new dude exec producer) had decided to end her character, and through that episode of TD, which also had ADC and actor Colman Domingo, who plays Victor Strand, it was clear that everybody was shook about the decision to kill the character.

And okay, yes, it’s a show about the end of the world. Lots of people die. There are trails of bodies throughout both franchises, but even in death, representation matters. LGBTQ people, white women, WOC and MOC get picked off a lot more than cis white dudes in show business, and they’re already underrepresented.

Mo Ryan, former writer at Variety (and all around awesome person), had a great Twitter thread on Madison’s death and why it’s BS. And she points out that it’s not only sexist, but ageist. Let’s have a look.

Truth. And if you’re interested, here’s the link to the Variety piece she mentions in the Tweet.

Mo goes on in that Twitter thread to point out the BS involved, and brings up the really shitty things that happened to actress Mary McDonnell at the end of the run of the series Major Crimes. Mo? 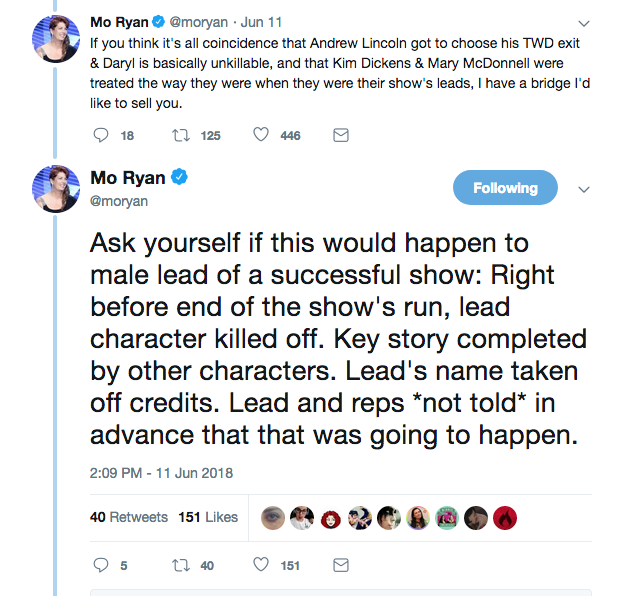 Uh-huh. So, basically, Andrew Lincoln, who plays Rick Grimes on TWD, got to choose his exit and arrange it with the show while Dickens and McDonnell were basically TOLD that they were done, that their characters were being killed off even though both were female leads in each of their respective roles. And, coincidentally, both women are over the age of 40.

Dickens on finding out that Madison’s story was ending:

Well, it was shocking. Obviously it was shocking to me and it was disappointing. It was heartbreaking. I have loved this character, I’ve loved playing this character, I’ve loved this show, and I’m so proud to have been a strong female empowered lead of a genre show. They’re usually led by male leads, and it was just such an honor to have this special experience of being that lead female calling the shots. And also, I’m not in my 20s or not in my 30s, mind you. She was a mother too — a mother who was ferocious, and I just thought it was just such an honor to get to play her. — Dickens interviewed at Entertainment Weekly

Ryan wrote about this at Hollywood Reporter this week, too. And she’s got some receipts:

So, females on cable TV shows are outnumbered by males by a ratio of almost two to one; the women that do exist in that realm are often relegated to supporting or unimportant eye-candy roles. Relative to their representation, they die a lot: According to a 2016 Vox study, 44 percent of deaths happen to women. And the nondead women that exist are rarely older than 40.

More importantly, as I wrote during an onscreen female bloodbath that occurred throughout 2016, a show’s lead is usually fitted with a “cloak of invincibility” — but usually only if the lead is a man. On the rare occasion that a TV program’s lead or co-lead is a woman, we’ve learned that the cloak is full of holes. She can die any time.

And wonders, basically, WTAF, with the decision to kill off one of cable’s — and TV’s in general — mature female leads? Indeed, Ryan notes, the truth is that shows aimed at the mainstream RARELY cast women over 40 in the most important role. And FTWD ignored this context and history, just to feed into the “major death” trope. It is, Ryan says, “a massive lapse in judgment. That fact that this decision comes from The Walking Dead franchise, which has come under fire for its treatment of women and people of color in the past, is even more depressing.”

So yeah, Andrew Lincoln got to write his own ticket off TWD while Kim Dickens got less than HALF the time Lincoln got and didn’t even make it through four full seasons. And from interviews Dickens has given, Madison’s exit sure as hell wasn’t her idea, and she didn’t want to leave the show.

So here she was, the lead on this show, and she was told that her character was going to die halfway through the fourth season.

To which I say, fuck.that.shit.

Women are already under-represented in media. And jfc, it’s SO HARD to find shows with strong women over 40 in lead roles who not only serve as representation for fellow women viewers in that age bracket, but also for younger women who can then see an older woman kicking ass and doing what needs to be done. That shit is important for younger women to see, because it demonstrates that even as older women, they can still be strong, still take names, and continue being the badasses they need to be.

Having the Madison character being the badass mom/leader and interacting with the younger burgeoning badass Alicia daughter character was a powerhouse dynamic. Two generations of women laying it out. That’s some powerful mojo, and it was ripped away. Something that the showrunners sure as hell didn’t even deign to address when they defended killing Madison off.

Which is why, dear readers, we need more women in entertainment. And to you younger women who are going to get in and change the damn world with your awesome stories and story-telling, don’t forget older women and their stories, too. Because one day, you’re going to be those older women, and I really hope it’s not as hard to find that kind of representation then as it is now.

Happy Friday and may The Force be with us.

EDITED TO ADD: Discovered today that Alycia Debnam-Carey was totally bypassed as were other female characters and it appears the new lead is Lennie James Morgan, who crossed over from TWD at the beginning of this season. WTAF, FTWD?