We’re going to leave a mark

I wanted to give you all an update on the issue of the debate raging over the bathroom non-discrimination policy at a local high school in the legislative district I’m running in.

You may recall I attended a meeting in May that was overrun by hundreds of uninformed members of the community, screaming any number of hateful slurs and outright lies regarding the certain Armageddon that would result from such a policy. The pastor of the church across the street from the school fumed and shouted fire and brimstone, before threatening his resignation as the girls’ basket ball coach. Allowing any student to utilize the restroom of their gender identity is something that these folks would never allow. That was how May’s meeting ended.

I honestly thought when they scheduled the follow up meeting for July that the school board might cave. So, leading up to July 17th, my campaign schedule filled up, as usual. I had three different events scheduled that evening. I got some advice to steer clear of the meeting for the good of my campaign. These folks were well-meaning. It’s not that they didn’t support the change in policy to support transgender youth, they just thought it might do more harm than good for me as a candidate in this little town.

Yes, I had three choices. Two decidedly safer as a candidate. The third is where I knew I had to be. I felt viscerally in my heart that if this was the one thing that cost me the election, then so be it, but I was going to support those transgender kids. We rallied more allies from around our county and put out a call to groups all around Western PA. I had no idea how many might come. As we gathered at the high school, again the green shirts (signifying those against the policy) were everywhere. To my pleasant surprise, our numbers had swelled from 10 in May to over 50 this night. My friend, Jessie, from the local Veteran’s for Peace group, stood in the back with a large, hand-made sign proclaiming: “Trans Lives Matter!” 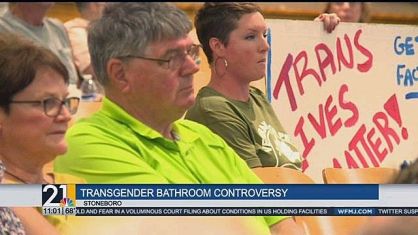 The school superintendent was outstanding. He and the Solicitor explained the policy and legal requirements regarding non-discrimination as outlined by the 3rd Circuit Court. They took great pains to explain there will be numerous new restroom facilities and privacy features added to ensure ALL students are safe and comfortable. I feel confident that the SB has done everything they can to address concerns. But fear has a way of closing people’s minds.

The featured speaker of the evening was a man named Tyler Titus. Tyler is the first openly Transgender person to be elected to a state office in Pennsylvania. He is a member of the Erie School Board and was there to provide solid facts with the aim of helping the community understand. Tyler did so much more than that. His speech was eloquent, powerful, gut-wrenching, and the absolute most gorgeous performance I’d ever seen.  Watch it here. I dare you not to cry.

When the speakers were finished, we sat through another round of angry tirades and bigoted rants. Vows to sue the school district, even if they bankrupted it. The superintendent held firm, restating the law. I was proud of him.

I wasn’t called on to speak, so I decided to post what I’d written the next day on my campaign page. I felt it necessary to publicly state my support and offer statistical facts about how there has never been a crime relating to transgender policies in dozens of cities nationwide, and experience from 25 years of policing, mostly working in sex crimes & child abuse. Never once have I arrested a transgender person for a predatory sex crime.

I knew I’d probably get a little backlash. I had three angry people tell me they’d never vote for me. They blew up my post with drivel and anger. But. The positive comments and support came in an avalanche. I quietly received numerous requests to join our page and campaign. We canvassed the very next weekend in that tiny town. We had planned a meet & greet picnic the following Sunday for residents to come out and talk about their concerns. Our canvass included invitations to the picnic for all. We were yelled at in one yard. The woman screamed at us to get off her property. We finished canvassing and got ready to host the picnic, unsure if anyone would come–or if we’d get an angry mob.

In a town of only a few thousand people, 50 people came to the picnic. Not one of them to heckle. Every single attendee requested one of my campaign yard signs. Seated in the crowd was a transgender student from Lakeview High, smiling. We talked about healthcare, jobs, funding public schools, and most importantly, ending the ugly politics and hate strangling our progress.

I have no idea how this campaign will ultimately come out. I only know we are going to leave a mark.