Fangirl Friday: what and who are you reading?

Y’all, I’m illin’. And not in the 80s sense. In the actual fighting off cold virus cooties sense.

So my head is all fogged n’ clogged and though I was conducting scientific re-watching of the most recent Wynonna Earp episodes, I’m too hopped up on decongestants to to figure out what the hell I’m doing.

So please, y’all — let’s talk about things you’re reading that you’re loving and/or particular authors that you’re loving. Introduce us to some new ones! I’ll start, and heads up — I’m partial to spec fic, so if that’s not your gig, I’m hoping something among these will convince you to try it out.

Here are 5 authors/things I’m reading that are blowing my mind (prior to decongestants):

JUSTINA IRELAND
My podcast buddy and author colleague Lise MacTague and I just did an episode on Justina Ireland‘s Dread Nation, a thought-provoking historical framing of a zombie apocalypse that occurs during the Civil War and ends up re-creating the systemic racist and segregationist policies of whites toward blacks, even years after the war when the country has settled into an existence between the living and the undead. 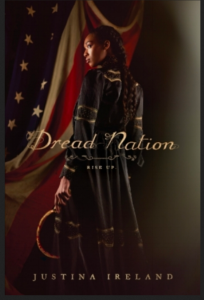 Black children are taken away from their families at early ages (this country has a history of doing that to people of color) to work for whites, and some girls are taken to “finishing schools” which train them how to be servants/companions/bodyguards for young white women. Basically, black people are trained in zombie (“shamblers” in the parlance of Ireland’s world) killing, but without guns.

It’s written in first-person present through the eyes of Jane, a young black woman at a finishing school who has mad skills with sickles. It’s a POV that’s not generally my fave, but Ireland is so good that I got sucked right in. And I love how she constructs her post-apocalyptic world as basically a reconstruction of the old, replicating race and class hierarchies against a backdrop of the undead.

Also, Lise and I would really like a poster-sized image of the book cover. kthx.

REBECCA ROANHORSE
I freaking love this woman’s work. AND she just won a Hugo (she’s also a Nebula and Campbell award-winner) for this utterly brilliant futuro-colonial brainfuck story, “Welcome to Your Authentic Indian ExperienceTM“, available via Apex Magazine. Hit that link; you can read it for free. 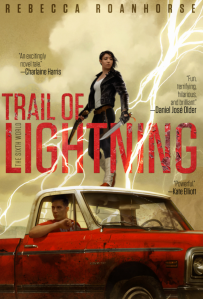 So I’m also reading her debut novel, Trail of Lightning and I fucking LOVE it. The protagonist is Maggie Hoskie, a Dinétah monster hunter, and I’ll tell you what — ain’t no monsters like freaking Dinétah monsters, y’all.

And Roanhorse gives us another twist — this tale (first in a series) takes place after an apocalypse referred to as “Big Water,” which is cataclysmic flooding as a result of climate change. And part of the world that survived is the American Southwest. Part of that is the Navajo Nation, so the locations Hoskie talks about I’m familiar with, and it was just so great to see those settings through her eyes.

Hoskie has Diné clan powers, and she ends up with a sidekick who also has some clan powers, and with his help, she has to figure out who’s creating monsters that are terrorizing and killing people. And she has to of course dispatch the monsters AND to confront her past. All against an amazing backdrop of the American Southwest and Indigenous cultures. Freaking love this.

P. DJÈLÍ CLARK
I discovered Clark’s writing by accident while I was running around on the Twitterz (as I am wont to do) and saw that he had posted a link to a short story that he had written, available at the Tor Books website (Tor is a major spec fic house). It sounded really cool, so I went and started reading and I couldn’t stop and at that point I started following him because he’s super-talented and writes really interesting characters, including strong women protagonists. 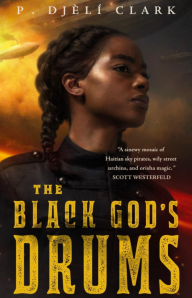 Called “A Dead Djinn in Cairo,” it’s a fabulous steampunkish and otherwordly view of 1912 Cairo. Plus, he writes really freaking cool blogs on science fiction and fantasy and history and also POC in media (which you can find on his site).

His debut novella just dropped, like, two days ago. The Black God’s Drums takes place in an alternate New Orleans, including airships, adventure, and orisha all tangled up in the Civil War. A wall-scaling girl called Creeper wants to escape the streets for the air, specifically aboard an airship helmed by Captain Ann-Marie. She works to earn her trust with info she’s got about a Haitian scientist and a mysterious weapon he calls The Black God’s Drums.

I mean…YES, PLEASE. I haven’t started the novella yet (just bought it), but I’m psyched to read it.

BECKY CHAMBERS
My fab podcast colleague Lise MacTague recommended Chambers’ work, which is awesome space opera. I’ve started reading the first in her Wayfarer series, which chronicles the interwoven futures of the everyday beings (human and other) living in the future. 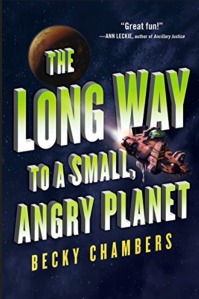 Each of the three books has been shortlisted for boocoo awards and they’ve won a few. The first book, The Long Way to a Small, Angry Planet, takes the reader on a journey with a motley crew on a crazy adventure (through space, of course). The crew of the Wayfarer includes Rosemary Harper, Sissix the reptilian pilot, the engineers Kizzy and Jenks, and Ashby, the captain. Life is chaotic aboard the Wayfarer, and things get a lot more dangerous with a job the crew takes.

Super fun space opera with great characters and fab writing. I’ve just started this one, too, and so far, SO FUN! WOOO! Thanks, Lise, for pointing me in this direction.

ONEMILLIONGOLDSTARS
OMGS (dig that acronym I just created) is writing a really cool Clexa fanfic titled “A Crown Seldom Enjoyed.” What the author is doing here is writing Clexa AU in the Game of Thrones setting and it’s sucking me right in.

The writer updates regularly, and how about THIS for a description of this fanfic deliciousness?

To maintain the fragile peace between north and south, Clarke of House Tyrell is sent to live in Winterfell as an act of faith between the two kingdoms. There, she is put under the protection of the first queen in the north, Queen Lexa of House Stark, Daughter of Wolves. A woman draped in steel and silver, wolves at her heels and rumoured to be a manifestation of the fury of the old gods; Clarke refuses to be awed be her quiet violence and cold smile. Instead of fostering unity, the meeting of the wolf and the rose lights a spark that spreads through the rest of Westeros, threatening to burn it to the ground.

That’ll give you a taste of this writer’s style, too. Totes enjoying it.

(For those not in the know, Clexa is the relationship of Clarke Griffin and Commander Lexa from the post-apocalyptic drama The 100.)

And y’all, do yourselves a favor and read N.K. Jemisin, who just won her THIRD Hugo! WOOO! This is a THREEPEAT, friends, in that award. Never been done before! Her acceptance speech two weeks ago is truly amazing. It’s being hailed as one of the best ever, and well it should be:

Anyway, what’s on your device/coffee table for reading? 😀

Happy Friday, and may The Force be with us. Or at least with the decongestants…