With Pride season coming to an end, I’ve found myself reflecting on the last ten years of my pride-going life. See, ten years ago I came out as a lesbian. Ten years ago, I had the first of those absolutely terrifying, life-altering conversations with family and friends which, naturally, ended up being done in four different iterations because only one coming out conversation would be too simple.

Anyway, once that roller-coaster of a summer ended, I was relieved. I’d done it. I’d told my people. Sure, we never really stop coming out. Each new place, new job, new acquaintance has us explaining who and what we are on the regular. But once that big, scary door is kicked down for the first time, things (hopefully) get a little easier.

But, what if, after all that work is done, you willingly throw yourself right back into the closet?

Let me explain. Five years after I came out, I was twenty-five and living my life in the big-D (that is, Dallas, Texas). I had a wonderful job, great friends, my supportive family was nearby, and I even enjoyed a date from time to time. Despite all of this, I was restless and began looking for something new. That “something new” turned out to be the Peace Corps in Peru.

I will never forget my pre-Peru interview. I asked the interviewer (herself a Returned Volunteer) about the feasibility of being out during my service. She smiled sadly and said, “You may have to keep that to yourself while you’re abroad.” In other words, “That closet you worked so hard to get out of? Step back into it and close the door behind you.”

Fine, I reasoned. I was in the closet for the first 20 years of my life. I can do that again, right?

There I was, now 26 years old and stepping off a plane into a heavily Catholic and conservative country where being a member of the LGBTQ+ community isn’t illegal, but people who fall onto the spectrum are discriminated against, judged, targeted and generally not accepted.

What is it going to be like to live for more than two years where loving whom I loved is frowned upon, so much so that a kiss shared between two women is edited from TV nationwide?

Well, it was not ideal. Yet, I never regretted the choice to experience life in a country vastly different from my own. Despite the agony of hiding who I was to each Peruvian I met, despite having to speak quietly when I called my soon-to-be girlfriend at night or making up excuses for why I was traveling to see her, there were a few moments of light during a time that felt like stepping back into the dark. That time was Pride.

The woman who became my girlfriend (and is, happily, still with me three years later) and I decided to attend Lima’s Pride Parade. We weren’t sure what to expect, but we had a feeling this parade would be unlike any we’d experienced in the U.S. 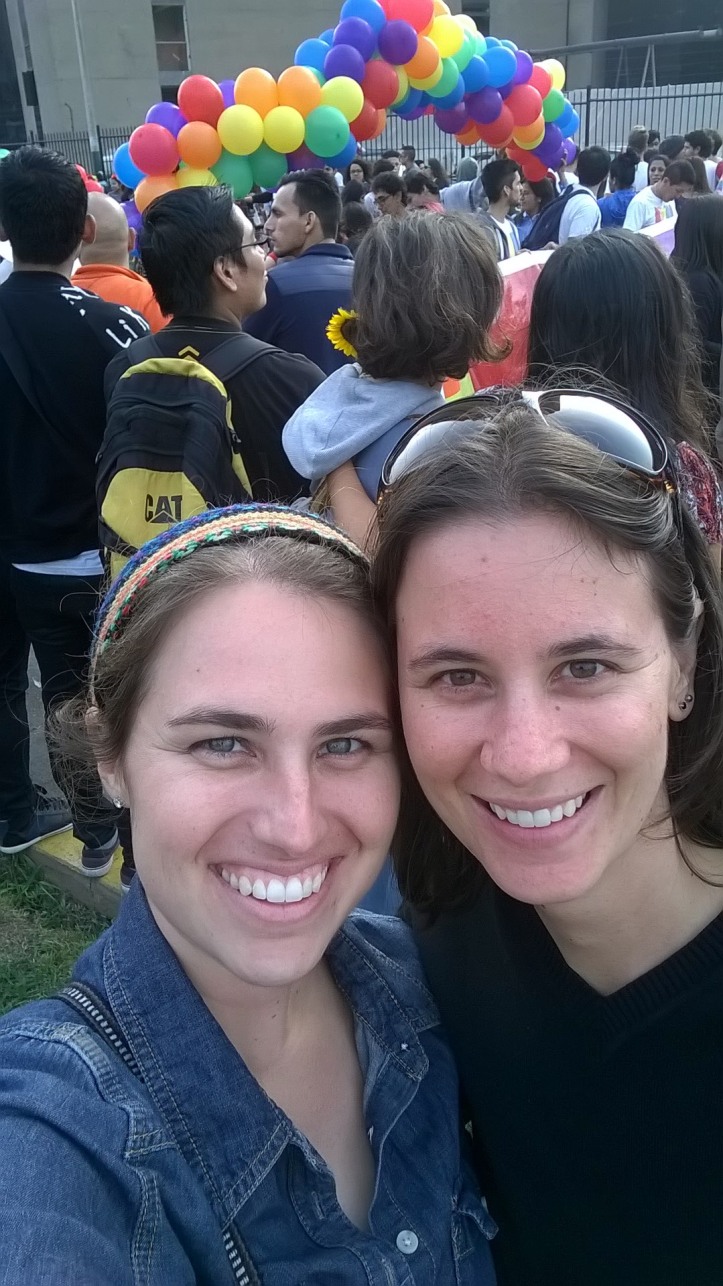 Certain aspects, it turned out, were exactly the same. To our pleasant surprise, thousands of people turned out to walk the main streets of Lima, dressed in glitter and rainbows and holding posters bearing uplifting and loving messages. Even with this, though, we were nervous. The streets were packed with pride, but the buildings on either side loomed with something unfamiliar: perplexed and disapproving onlookers. Men and women hung out of their second-story windows wearing looks of disappointment, despair, or shock. This was a time of joy and celebration, but all around us were people who didn’t, or wouldn’t, understand. How could they? In their world, love that fell out of the heteronormative was censored, spoken about behind closed doors, or prayed away.

While I clutched my girlfriend’s hand as we walked, a school bus came into view. When we passed by, one of the young girls inside the bus held a piece of paper up to the window. On it was written, “Estamos contigo.”

We are with you.

On that bus, I caught a glance at a brighter future for those who don’t have the safety net of returning to a country who accepts them and, generally, stands up for their rights. Once that parade was over I would return to my life of hiding, but that life had an expiration date. I would eventually go back to a place where I am loved whole-heartedly for who I am, unlike the majority of Peruvians proudly marching down the streets of their country’s capital.

Those girls on that bus reminded me of my privilege. Yes, not being true to myself while in Peru was difficult. It wasn’t, however, as difficult as a closeted life without end. I know this is the fearful reality for many. While that is a bitter pill to swallow until things change, it encourages me to know people like that young girl exist.

That being said, I think it’s only fitting I end this with a quote from one of the most fabulous men of all, Albus Dumbledore: “Happiness can be found even in the darkest of times, if one only remembers to turn on the light.”

Sam Ledel is originally from Dallas but recently relocated to San Diego with her girlfriend, whom she met while working abroad in Peru. She has a BA in creative writing and is currently working on a Young Adult fantasy novel. Sam continues to create pieces representing strong and complex female characters.
https://www.boldstrokesbooks.com/authors/sam-ledel-279
https://www.samledel.com/
Twitter @sam_ledel