Who doesn’t like a good scary movie? Well,  a lot of people don’t I’m sure, but I’m not one of them. I’ve watched them since I was a kid, but they have never really scared me. Nothing kept me up at night or gave me bad dreams, even the gory stuff I probably shouldn’t have been watching.

I don’t frighten easily. *Cough* except for spiders and weird bugs. My wife could tell you stories, but she won’t or rather she’d better not! We all have to have someone we can be vulnerable around. Am I right?

Anyway, the one and only time I ever got scared was the summer I was getting ready to go to college, which was about twenty-six years ago. For some reason, I had bad insomnia. Couldn’t sleep for shit! It lasted for a while too. I was maybe down for a couple hours then I’d pop back up fresh as a daisy or maybe a dandelion. I’d get up and go in the living room to turn on the TV.

One night, Salem’s Lot was on. Loved that movie as a kid and I’ve read the book. So, I made sure all the lights were out and I laid on the couch reacquainting myself with the characters and the story. When it got to the part where the kid was floating outside the window, knocking on it trying to get in, I rolled my eyes and scoffed at the cheesy special effects and the horrible make up. 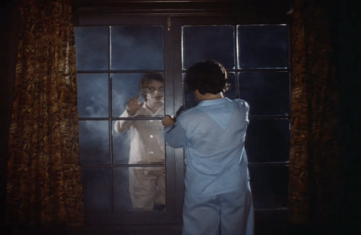 I sat up to fluff my pillows. Our couch wasn’t the most comfortable. Out of the corner of my eye, I caught a flash of white, a shadow. I turned toward it. All I saw was billowing white. I nearly screamed my fool head off, but before I got too loud, I looked to see there was a familiar body to go along with the ghostliness of it all.

My mom. It was my mom in one of her frilly night gowns. She laughed and then asked, “Girl, what’s wrong with you?”

I told her I was watching Salem’s Lot. She told me I was losing my mind and needed to really try to sleep. Shit, I was up the rest of the night after that, seeing flashes of white everywhere.

That was a true story of humiliation and possible hallucination, but it still stays with me. I’ve continued to love scary movies. I love the psychology of them even if they don’t make me scream. There have only been a handful the past few years that have pulled me in. The first is a more recent one, Hereditary. It’s a slow burn of a movie, but we like slow burns don’t we ladies? All that build up with the huge satisfying pay off at the end. This one is definitely a psychological family drama and as the viewer you spiral down with it becoming uncomfortable and completely creeped out.

Then, there is The Haunting of Hill House. It has some excellent jump scares, but the acting and the story suck you in. You won’t want to come out. Let’s also talk about Theo. Let’s talk a lot about Theo. I just finished The Chilling Adventures of Sabrina. It’s not so much scary but more commentary on the state of women within the patriarchy, but chilling is the right word for the whole thing. I hear the new Halloween is nothing to be sneezed at either. Supposedly it has a trifecta of kick ass women, some laughs and full of tropes we’ve come to love.

Let’s not forget the true to life horror stories. You know the ones that could come true or that are already coming true? The Handmaid’s Tale. Need I say more? With so many Aunt Lydia’s out there it’s hard not to feel our slide toward the inevitable. I’d be remiss if I didn’t mention the movie, Get Out. It has to be seen to be believed. No shit.

Lastly, let’s discuss the terrifying horror that are all the movies that contain white people swooping in saving a minority group. Hell, that’s almost every movie…ever. Or even the movies where black people are depicted as gang bangers, criminals, uneducated, maids, butlers, nannies or Uncle Tom’s. You know? The slave, the dandy, Old Darky and Mammy?

By the way, how’s this for a shameless plug? The book giveaway for Drawing the Line is still on going. Enter daily to increase chances of winning one of 3 eBooks.
a Rafflecopter giveaway

Don’t be shy. Tell me about some movies that have scared you.

KD’s work is available on Amazon or at Ylva.  Her next book in the Cops and Docs Series, Drawing the Line will be released November 7th and is available for pre-order at the Ylva Shop. For more information on KD visit her website.