HI! So we’re going crazy already over here at Women and Words getting ready for the HOOTENANNY–which is the giant-ass book giveaway that goes on for TWELVE FREAKING DAYS. Beginning 12 December, we give anywhere from 20-40 books away EVERY FREAKING DAY until 23 December at which point Jove and I collapse into a pile of gibbering goo because we’ve lost our collective minds in the happy fun-times of it all. (here is an example from last year so you can see the cray for yourself)

OH! And in other news, the Lez Geek Out! podcast that I, Andi, co-host with my friend and colleague author/fangirl/cosplayer/all-around aweomesauce buddy Lise MacTague is in the process of moving to another platform due to unforeseen circumstances. We should have this taken care of in the next couple of weeks or so at which point we’ll be back to our usual hijinks. We’ll keep you posted; check in with us on Twitter: @LGOPodcast

So that’s some of what’s going on. In the meantime, here are some things that are keeping me kinda sane:

My Favorite Murder podcast. O.M.G. If you’re not listening to this, WHY THE HELL NOT? It’s two super-awesome women talking about true crime cases every week as well as their own struggles, and they’re freaking hilarious, irreverent, properly outraged at the horrible things people do to each other, and they go on tour and post those shows, too, and…I cannot describe how amazing this podcast is. 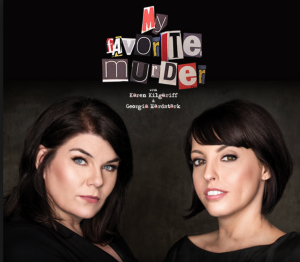 Do yourself a favor and join comedians Georgia Hardstark and Karen Kilgariff every week. I guarantee you’ll learn things and come away feeling remarkably better about the reality shitshow we’re all living. Plus, Georgia and Karen are very open about their own struggles with anxiety, depression, and addiction and encouraging about seeking help. This podcast has created a remarkable and supportive community. Want to learn a bit more about it? Here. And here.

Writing Clexa fanfic. If you enjoy canon divergent fanfic based on the Clexa ship from The 100, you might enjoy my giant-ass 500,000-word “Grounded.” If you enjoy Clexa AU, my totally fluffy/feelz “bang shui” might fit the bill. It’s also a holiday kinda thing, so…there’s that. 😀

The Arrowverse crossover event that’s happening December on the CW. “Elseworlds” starts December 9th and involves Supergirl, Arrow, and The Flash. ALSO, there’s a new she-ro in town…this crossover debuts Batwoman, played by Ruby Rose. For those who have been hiding under rocks for the past decade or so, Batwoman is now canonically a lesbian. Bring the rep!

And here’s SyFy Wire to get you up to speed on Batwoman in two minutes:

Legends of Tomorrow. If you are not watching this show, START NOW. Based on DC characters from the Arrowverse, it’s a time-traveling superhero crew with lots of queer rep, strong women characters, hilarious dialogue, and all kinds of quirky ridiculousness mixed in with some genuine moments between characters trying to figure themselves out. Seriously. This show is the shizzle and one of the main characters is bi and she’s currently with a woman. It is SO good. You can catch the first three seasons on Netflix (US; not sure about elsewhere).

Black Lightning. OMG I LOVE THIS SHOW, TOO. Based on the DC Comics character, Jefferson Pierce plays a teacher/principal by day but becomes righteous crime-fighter Black Lightning at night. He’s a meta-human with electrical powers. The CW’s adaptation has his daughter Anissa coming into her meta-powers as Thunder (and she’s a lesbian, people!) while his other daughter Jennifer is just coming into hers, and they’re similar to Dad’s.

Jefferson’s ex-wife (but they may be reconciling…) Lynn is a neuroscientist. There are all kinds of really bad villains in the city of Freeland, and the show explores issues that Black Americans face every freaking day. The primary characters are Black, though there are other characters of color, too, and a lot of the secondary and tertiary characters are black, which is so great to see. We’re in season 2 right now, but you can catch S1 on Netflix (US). Also, the soundtrack is phenomenal.

The Gifted, which I’ve been watching on Hulu though it airs on Fox (Marvel universe). Set in the near future, this follows two sibling (bro and sis) who are both meta-humans and they and their parents end up having to go on the run because in this near-future, meta-humans are considered really dangerous so all kinds of laws are passed to marginalize them and there’s experimentation going on and illegal detentions — the show hits pretty close to home on current event, though the arc eventually unfolds with meta-humans trying to set up a war between humans and meta-humans in order to exploit it and basically because just another set of authoritarian assholes. The writing it tight, the interpersonal relationships are heart-wrenching, and the performances are amazing. Check this one out. It’s currently in Season 2.

Here’s the S1 trailer, to give you a sense of it:

And right now, I’m finishing up my NaNoWriMo project, which I hope to publish this coming spring. It’s the first in what I’m envisioning as a trilogy — urban fantasy. We’ll see how the re-write goes. LOL

Anyway, happy Friday and may the odds be ever in our favor.