Greeting and Happy May Day to all of you!

I’ve finally managed to catch up with life post-Clexacon, which was AMAZING, btw. I was on several panels and worked the Bold Strokes Books booth, and I was surprised at how many lesfic readers sought us out and purchased books. At one point Melissa Brayden and Georgia Beers had an autograph line halfway down the entire vendor hall – talk about fandom! This event is definitely on my go-to list for next year.

But today, I’d like to give a shout out to a new Bold Strokes Books author, Eden Darry. 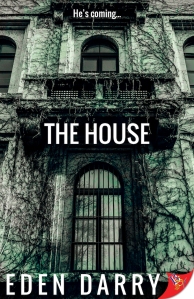 Eden’s debut novel, The House, was released just last month and it’s a paranormal, horror tale guaranteed to get your blood going. Check out this description:

Sadie, Fin, and their two children were a perfectly ordinary family. Even if Fin felt taken for granted sometimes. Even if their introverted son, Liam, had terrible nightmares and knew things he shouldn’t.

But everything changes the night Sadie is viciously assaulted by former client Lance Sherry. Sherry knows where they live, and when the police fail to catch him, Sadie and Fin are forced to run. They think they’ve found the perfect place to start over. The house is everything Fin dreamed of, but as they settle in, Sadie discovers their home may not be what it seems, and daughter Lucy’s imaginary friend might not be imaginary at all. Or even a friend. With Lance Sherry hunting them, the house could be the least of their problems. He’s coming to finish what he started. And he won’t stop until he finds Sadie.

I had the opportunity to interview Eden during Women’s Week last year in Provincetown and you can view our chat here. Happy viewing!