A reader’s perspective on more time to travel and golf

It seems to be the month for road trips and although our vacation wasn’t quite as epic as Ann Etter’s recent travels – it was more than enough for me with my aversion to multi-day car rides.

I’ve mentioned recently (okay, maybe more than once) that winter here was particularly harsh and spring hasn’t been much better. Fortunately, this is the year that we decided to go ahead with a postponed trip down to North Carolina to take golf lessons and get a jump on our golf season. I’m admitting upfront that I’ve become a Golf Channel – LPGA Tournament coverage groupie and was looking to seriously improve my game so a road trip was in order. How was the trip? Well, right out of the gate it was probably overly ambitious to think that we could get to Richmond, Virginia in one day (approximately 11 hours driving). Needless to say we didn’t as we hit rush hour in two different cities, construction, and Washington DC traffic on a Friday night (OMG thankfully I wasn’t driving). I had forgotten about that leg of the journey and we were faithfully following the GPS directions when …. there we were, right in the middle of it. Having the option to pretty much avoid rush hour traffic and alternate routes to bypass construction here at home, the trip down was a bit of a culture shock. Add in tailgating the likes of which I haven’t ever seen, drivers that believe they can change lanes on a dime (and do), and, sadly, roads strewn with such spoils that the Clampetts would have been in heaven if it was their trip to Beverly Hills. On the plus side the rest areas are very nice. Oh, did I mention the hours of pouring rain?

In the end the destination was worth the journey. We probably won’t ever do something like this again but it was pretty neat to go to such a well-organized, fun golf school in such a beautiful setting during wonderful weather. Our group of eight consisted of seven women (5 Canadians in all and two lovely Swiss ladies) and one lucky gentleman from Manhattan. While I probably am not a better golfer after the experience, I’m thinking that I can now self-critique like nobody’s business.

In anticipation of our trip I downloaded and read a few golf themed favourites to get into the mood and checked out a couple of new releases. Coincidentally, Jen Silver’s Running From Love (2017) takes place during a golf school. Unlike ours, the program at Temperley Cliffs is for women only and all sorts of drama unfolds as the students begin to arrive.

Imagine meeting your soon to be ex-wife, who you are trying (unsuccessfully) to get over, and her lover while on a research assignment at an out of the way seaside golf resort. Really, how cool would it to be paid to do research like this for authors and get paid for it? The characters are young and old, lesbian or not, golfers or not. You don’t need to know much about the game or even want to, in order to get thoroughly caught up in the action. I particularly enjoyed the back end of the novel as events unfold at a fictional professional golf tournament.

In Running From Love one of the four instructors is female and we have the added bonus of our young Canadian golf pro there to help out during her vacation from the tour while visiting her lover the Lady Temperley. Interestingly, of the sixteen participants at our golf school ten (63%) were women and of the four instructors none were women. During the closing dinner I asked the director/instructor if he had any women teaching pros on staff since given the high percentage of women students this week, I thought it odd there weren’t any. He explained that of the twelve instructors on staff there are two women – one fully “accredited” and the other in training. On average the percentage of women in the school is about 20 to 25% (this week’s school was an exception) and apparently this reflects the percentage of female golfers in the U.S. as well as teaching pros registered with the PGA.  According to him, female teaching golf pros can pretty much write their own ticket. Hmmm, anyone out there have any opinion to the contrary? 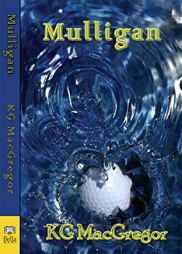 Although KG MacGregor’s style has certainly evolved since the release of Mulligan (2005), it remains one of my favourites from her body of work (along with T-Minus Two for obvious reasons) and I enjoy going back and rereading it occasionally. Louise Stevens finds herself facing retirement on her own after the sudden loss of her long-time partner and there are sparks from the start with her first inauspicious run-in with golf pro Marty Beck. MacGregor seamlessly introduces social issues prevalent during their lives as well as critical events that impact them. The golf related scenes are realistic and it is refreshing to see a novel with main characters all in their sixties that have persevered, led eventful lives and continue to actually have active lives on and off the golf course.

A recently released novel with a golf setting I very much enjoyed is Harper and Caroline
Bliss’s A Swing at Love (2018). Their first collaboration and hopefully not last, A Swing at Love is a light sweet romance between newly arrived golf pro (Tamsin) and an older

divorced, previously straight “latebian” club member (Diane). Tamsin has pretty much been run out of her previous position at another golf club and despite her best efforts to keep a low profile the more things change the more things stay the same. Both women enjoy the golf scene while getting to know each other and explore the possibility of a relationship. Just a heads up that unlike many of Harper’s novels, this is pretty much all fade to black and it works well here.

Although there are not a lot of titles with a golf theme, besides those above you might also want to check out Tracey Richardson’s Side Order of Love, Julie Cannon’s Fore Play, and Nanci Little’s The First Resort. I’m sure I’m missing others with this list – if you know of any others – please share in the comments area – I’m always on the look out for a recommendation.