And now for something completely different. Not.

When I sat down (or maybe I was standing – it’s been a while) to write my very first novel, I purposely decided not to write about the law or crime because as a busy criminal defense attorney, my days were chock full of visits to the jail and legal briefs and, just like I enjoyed reading for escape, I wanted writing to be a cozy, fun place where I could cuddle up with a group of imaginary friends, none of whom wanted legal advice.

Enter Mac and Jordan and Aimee and Megan and Haley, the cast of Truelesbianlove.com, my debut novel. Not a hint of mystery or suspense, except for the will they, won’t they kind. Just strong women with strong friendships supporting each other while they look for their happily ever afters.

And then one day on a long drive to a court appearance in another town, an idea for a tale of suspense popped into my head. Write what you know, the little voice in my head said. You can combine it with a romance and have the best of both worlds. The voice would not be denied, and I wrote my second novel,  It Should be a Crime, which was released in 2009. It was a finalist for a Lammy and a Goldie, and it’s still one of my most popular titles. Its success propelled me on a nine year, nineteen novel journey of writing romantic suspense and intrigue. Along the way, I even managed to toss one of the gals from Truelesbianlove.com, Aimee, into the middle of a mystery and help her find her happily ever after. (Anyone know which book that was?)

The writer’s life has been very good to me and, while I plan to keep writing romantic suspense on the regular, I decided it would be fun to revisit an ensemble cast story that didn’t focus on solving a mystery, and hence the idea for the Legal Affairs series – a trio of fun and flirty contemporary romance novels set in a law firm in Austin, Texas – was born. The first story, Practice Makes Perfect debuts this month and the rest will come out in between my romantic suspense titles over the next year. These stories are completely different, but very much the same as what I’ve been writing the last nine years – strong women, finding true love, just without the dark shadows or blood splatter 🙂 I hope you enjoy them! 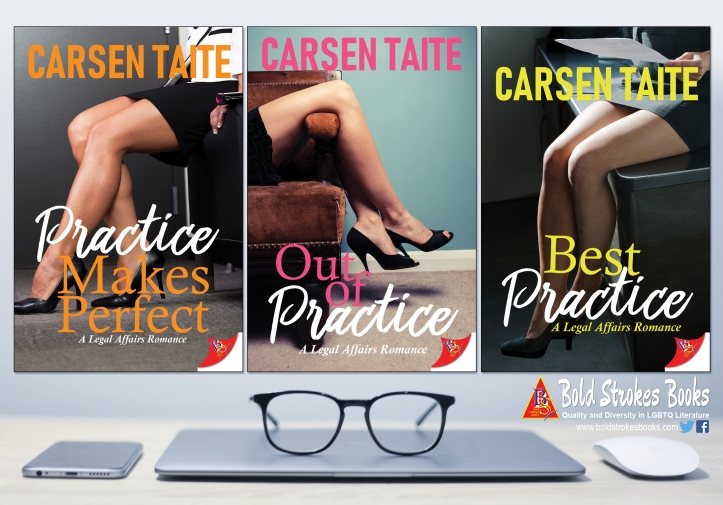 And now for a giveaway! Leave a comment to be entered into a drawing for an autographed copy of Practice Makes Perfect. Any comment will do, but leave your remarks by Friday, June 7th at midnight and I’ll draw the winner on Saturday.

I leave you with the synopsis for Practice Makes Perfect:

Meet law school friends Campbell, Abby, and Grace, law partners at Austin’s premier boutique legal firm for young, hip entrepreneurs. Or, it will be as soon as they score a victory for their first big client.

Campbell Clark wins the big pitch, and lands the client, or so she thinks, until the internet start-up insists her firm work with the legal counsel Campbell thought they’d be replacing. Wynne Garrity has never been second best, and she’s not going to let anyone screw up her chance of making partner, but to do so she needs to hang onto her client and prove to everyone her firm isn’t stuck in the stone age.

Reluctant team players, Campbell and Wynne would risk everything by giving in to the attraction that flares between them. In the boardroom and the courtroom, only one can win, but the price of victory could mean losing at love.