Tales of an Unlicensed Social Worker

Those of you who know or are familiar with me are aware that I’m in the mental health field. I’ve been rolling around in it for almost twenty years. That being said, I’ve seen, had, and been involved in my fair share of unusual and unpredictable situations.

And not all of them have involved kids. I can laugh these events off for the most part but when they were happening it was like I was having an out of body experience. For a little color, I’m going to share a couple of these incidents with you. They will make some people laugh and some people cringe. Some of you will do both.

I’m a big girl but it’s no secret that some people like big girls. In my initial meeting with a family years ago, I was forming initial rapport with the parents. We laughed. We talked about video games and TV shows. Turned out we had a lot in common which is always a good thing. Everything came to a screeching halt when the husband left and his wife leaned across the table to let me know they were into threesomes.

I damn near swallowed my tongue and probably turned twenty shades of red before I could utter a ‘no thank you.’ After a few more seconds, I then explained the inappropriateness of it all. The wife eyed me quite a bit in my tenure with the family, but I was able to brush it off without discomfort.

As recently as let’s say…yesterday I was propositioned by a new client’s uncle who showed up as I was leaving. He offered to come to my house and cook for me. His words were, “I can come over and fix you fried chicken. It looks like you like fried chicken.”

I do. I do like fried chicken, but I’m not into men who look like Fred Sanford. Hell, I’m not into men at all. I told him I was having salad and he offered to come toss it for me. At his age I really don’t think he knew what that meant, but still… 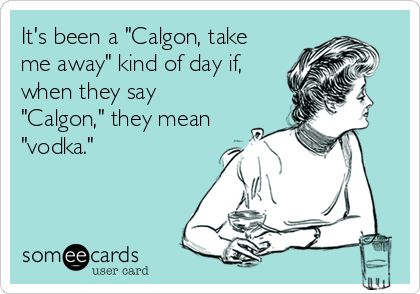 Calgon take me away.

On the flip side, I’ve met some really nice people who have felt the need to feed me. Bless their hearts. I’ve always been told that kind of thing was up to my discretion especially if it seemed like they would be offended. Now, I’ve never sat down to dinner with anyone that would be so totally wrong. I’ve had various dishes with turkey necks, weird local bayou birds, alligators and even raccoon which I found out after the fact.

Some of it was down right tasty and some of it was like sucking down warm puke. But, I smiled. I nodded and asked for recipes. Lord help me the things I do to put families at ease.

Now, I’m from the South so I’m no stranger to meat in its many forms. Growing up, I ate squirrel, deer, rabbit, racoon, possum and chitterlings. I have to tell you, when I figured out what these things actually were I started eating chicken more than anything. The only thing from that list I’ll eat these days is venison and rabbit. Nothing against anyone who view these animals as delicacies, but the simple fact is they are not for everyone. Me included.

I will close out this little sharing session with this: I make dogs pee. What do I mean by that? I make dogs do that excited pee thing. It never fails in almost every house I’ve worked in with dogs I’ve gotten a dribble of piss as well as stares from very confused owners.

Maybe it’s something with my pheromones that  attracts all the weirdness. What do yall think?

KD’s work can be found on Amazon or at Ylva.  Her next book in the Cops and Docs Series, Drawing the Line is now readily available. For more information on KD visit her website