THE STRANGER MEETS THE ESTRANGED

One of the great gifts of my retirement is the opportunity I’ve had to join a group of people who enjoy recalling, practicing, and speaking French. We gather in a welcoming community space each Monday afternoon. Our group varies in size according to our busy schedules.  Some Mondays there are more than a dozen of us, at other times, fewer. No matter how many chairs are filled, we’re all eager to reconnect with French vocabulary, travel memories, or classroom, family, and friendship experiences we’ve had in the past.

We tend to follow a certain routine. A few of us give a présentation orale about something we’ve done recently… a cultural event we’ve attended, reportage of a current event somewhere in the French-speaking world. A brief discussion usually follows.

We support each other by prompting momentarily forgotten vocabulary. A couple of people carry dictionaires. Others use their phone aps to recover words. Our skills span the continuum from advanced beginner to native competency. While we’re serious about our use-it-or-lose-it efforts, we haven’t created a tension filled “Oh-Lord-what-if-I-make-a-mistake?” atmosphere. We are convivial, kind, gentils with one another.

It’s been common for strangers to visit our group from time to time.

Such was the case a few weeks ago when a young man arrived and gestured to one of our members. The day before, he’d struck up a conversation with her when they attended the memorial service for a mutual friend. He told her that he was from Mali and was visiting his American fiancée. Because Mali was once one of France’s colonial possessions, French remained one of its official languages.

Our group member invited the young man to join our next session.

He introduced himself and sat in the vacant chair across from me. Then he looked at each of us and said, “Now that I have presented myself, you must tell me your names.”

Aware of the omnipresent male privilege, I wanted to say, “Hold on, Jack, er…Jacques. You just got here. You don’t get to call the shots.”

Of course, I didn’t say that. I was polite.  I felt I owed him respect.

One by one, we introduced ourselves to him. When it was my turn, I told him that according to the DNA results of Ancestry.com, someone in my chain of ancestors had been marched from the area that is now Mali and put on a slave ship headed West.

He grinned at me. “You must come to Mali. You will be my guest.”

For the next half hour, no matter who was speaking, this young man kept looking at me and smiling. My effort to deflect his gaze by focusing on the others seated at the table  was a fail, a “bigly” one.

When it was my turn to present my discours, a brief report about a book reading/signing event in which I’d been a participant the week before, I began by describing the event’s location, at Allentown, PA’s Bradbury-Sullivan Center. This wonderful facility serves that area’s LGBTQ+ community. Before I could finish pronouncing the “T Q +,” I noticed Monsieur Mali’s broad smile fade to a closed-lips, tightened-jaw line of anger and disgust. I swore I saw the glint of razors flash from his eyes.

Suddenly, decades-old memories of unpleasant episodes I’d experienced in college surged through my mind. I remembered physically dodging male students from Africa who, despite their mastery of English, seemed not to understand the word, “no.” It was the period when I’d discovered the shared similarities of the Black Arts Movement, Pan-Africanism, and Négritude literature. Eager to explore, I’d wanted to talk with the students from Nigeria, the Ivory Coast, and Gabon. I wanted to compare Nikki Giovanni’s poems to those of Senghor or Diop, not fend off persistent ogling and suggestive invitations.

Fast forward to the present, to my being totally out to the members of our French group. Although I’m aware of and concerned about the racist and anti-gay hatred promulgated by the trump regime, I didn’t hesitate to mention the Bradbury-Sullivan LGBT Community Center and to explain its purpose. Clearly, I’d forgotten about the places in the world where it’s patently unsafe to be queer.

My discomfort regarding this stranger’s visible animosity toward me led me to research Mali’s stance toward its LGBTQ population. In a word, it’s abominable.

Queer Malians have no legal standing in their homeland. They have nothing to protect themselves from harassment and abuse on the basis of their sexual orientation and/or gender. There are no publicly visible LGBTQ organizations. Such organizations were outlawed in 2005.

“According to the 2007 Pew Global Attitudes Project, 98% percent of Malian adults believe that homosexuality is a way of life that society should not accept, …the highest rate of non-acceptance in the 45 countries surveyed.” *

While it’s foolish to make assumptions, I’ll go ahead and assume that had this young man known my full identity when I introduced myself, he would not have invited me to visit his country and be his guest. He would have preferred that I remain estranged, exiled from Mali as well as from all the other countries that do not welcome me/us.

November 5th, 2019 is Election Day in many localities. Please go to the polls and cast your votes for your preferred candidates. Your voice is heard when you participate by voting in your local elections. 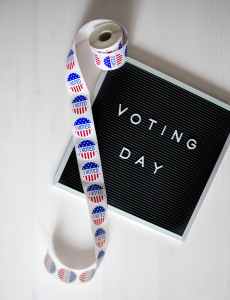 Renée Bess is the author of five novels and with Lee Lynch, the co-story collector of the 2018 Goldie Award winning anthology, OUR HAPPY HOURS, LGBT VOICES FROM THE GAY BARS. Renée is one of four winners of the 2019 Alice B. Readers Awards. You can find more info. about her at her website, http://www.reneebess.com. You can read her words here at Women and Words the fourth Thursday of every month.

Join 16,374 other followers
Follow Women and Words on WordPress.com