Yeah, yeah. I know it’s the day after Halloween, but I’m also way into Días de los Muertos, so…

Would you like to read my reboot of the Legend of Sleepy Hollow? Well, leave me a comment right here and I’ll freaking draw a few names and hook you up with a copy of the ebook!

I love this time of year. And I like rebooting classic stories. Washington Irving’s “The Legend of Sleepy Hollow,” originally published in 1820, is one of those.

So let me tell you a bit about the original story.

Regarded as America’s first literary ghost story, this one is ingrained in American folklore and pop culture and has spawned numerous re-tellings and movies. The tale of the headless horseman has also become practically synonymous with Halloween in this country, though Irving didn’t mention Halloween in the story because it wasn’t celebrated widely here and wouldn’t be for a hundred years after its publication.

The village in Irving’s story is named “Sleepy Hollow,” which was North Tarryton, New York, which actually renamed itself Sleepy Hollow in 1996 as part of an economic revitalization movement. Irving stayed in North Tarrytown as a boy in 1798 and was exposed to the area’s folklore, including rumors about a headless Hessian soldier. The ghostly horseman would ride to battle sites, the stories claimed, in search of his head.

Irving’s story is set in the 1790s and tells the tale of Ichabod Crane, who Irving paints as an awkward and arrogant schoolteacher who is attracted to Katrina van Tassel, the daughter of a wealthy local farmer. Crane vies for her attentions with Abraham van Brunt (known as “Brom Bones” in the story), the town thug.

Crane receives an invitation to a party one night and he goes, hoping to get his swerve on with Katrina. He leaves the party and heads home on his horse but encounters the terrifying headless horseman, who, legend had it, could not cross a certain bridge in the area (near the church where his body was buried). Ichabod, freaked out, races for the bridge, the horseman on his ass, and when he crosses the bridge, he looks back and at that point, the horseman throws his head at Ichabod and it hits him. He falls off his horse, which runs away, to be found the next morning with no saddle and no Ichabod.

Crane’s body was never found, but his hat was, in the brook underneath the bridge, along with a shattered pumpkin.

We’re left wondering if Crane really did encounter a ghost, or whether Brom Bones was pretending to be the specter to drive Crane out of town so he could hook up with Katrina.

Or…what if there were OTHER possibilities?

And that’s where I come in. I rebooted this tale with a modern and decidedly F/F spin: 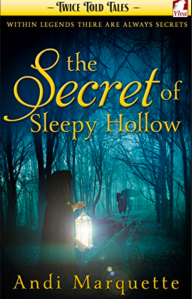 Tabitha “Abby” Crane, a doctoral student working on her thesis, doesn’t allow herself much time outside academia. Fortunately, she’s managed to squeeze in a research trip over Halloween weekend to the historical society of Sleepy Hollow, New York, where she hopes to uncover new research on the notorious town’s most infamous legend—that of the headless horseman. But she has a personal stake in this trip: Abby’s own ancestor, Ichabod Crane, disappeared mysteriously over two hundred years ago, perhaps at the hands of the ghostly horseman.

Abby has no reason to expect anything of Sleepy Hollow beyond immersing herself in archival collections and enjoying its Halloween festivities, but then she crosses paths with Katie, who makes her head spin and her heart pound. When Katie invites her on a nighttime visit to the glen where the horseman allegedly rides, Abby can’t say no, upending her plans for a quiet research retreat. And when Abby and Katie, who has her own ties to the famous story, find what may be the key to the disappearance of Ichabod Crane all those years ago, love, legend, and magic intermingle, making clear that Sleepy Hollow has plans of its own for yet another Crane.

And if you’re interested, you can read the original “Legend of Sleepy Hollow” via Project Gutenberg RIGHT HERE.