Not That Kind of Pill…

For the most part, I write what I know. Well, I do now. Of course,  some things are embellished and researched. I don’t know squat about being a cop, a surgeon, a teacher or a team facilitator, but where people are concerned, I’m used to diversity in my life. I think this comes through loud and clear in my new book, Big Girl Pill (Out December 3rd).

More on that in a little bit.

Readers who are aware of me know Blurred Lines/Crossing Lines. Those books were my introduction to the professional world of WLW fiction, lesfic, FF fiction or whatever you want to call it. They made a splash. That’s not bragging or arrogance when I say readers had strong reactions to those books for one reason or another. Respectfully, after I was done with Kelli/Nora and ready to move on to new creations, I chose an interracial couple.

This is what I know as a black woman married to a white one.

As I toiled over the characterizations in Blurred/Crossing Lines, it never occurred to me that my MC’s could be black. I’ve said this many times on my blog, podcasts and even on here. Simply because the default in lesfic is white characters. This much I was aware of. I wasn’t familiar with the overall rules of lesfic romance or what is affectionately called the romance formula, but I KNEW if I wanted these books to sell the characters needed to be white.

Let’s pause for a second now that I’ve thrown this information out there again. I think I need to clarify a thing or two. When I say I didn’t know the rules, I meant that I wasn’t a big reader of lesfic novels. I had my head in fandom and fanfic where, at times, there are no rules. This is the mentality I had writing my first novels and this is the mentality I maintain.

Big Girl Pill (available for pre-order) is reflective of that promise just as Between the Lines, Pink and Drawing the Line was. The characters are relatable, down to earth with depth and idiosyncrasies. These new characters, new people (Maya and Nina) are all this and more.  Their story is simple but somehow complicated as the synopsis outlines.

Maya Davis is done hiding. It’s left her empty and out of touch with her family. Now she’s a young woman on a mission: getting rid of residual feelings for her former best friend from college. Her plan is to put herself through a wringer by being in Nina’s upcoming wedding and burning away whatever emotions are left, so she can start anew. Her plan, however, has big holes, and everything she’s been feeling rushes through and leaves her thinking that this was a bad idea.

Nina Sterling is a work in progress, torn between being two very different things—the person others expect her to be and who she wants to become. For the past couple of years, it’s been easier to give in to her demanding, steamroller of a mother and her pleasant but controlling fiancé, but with Maya’s return for a lengthy stay in town, and encouragement from Nina’s hilarious cousin, seeds of rebellion are sown.

As Maya and Nina try to patch up the past and get closer, old sparks rekindle, and as they both grow into who they are meant to be, those sparks might just become a fire. 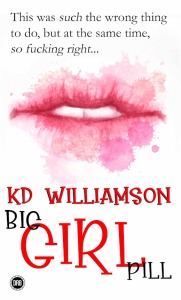 Written as I envisioned it. With the same mentality I started with.

And I hope you enjoy.

PS: This the last day of the first Big Girl Pill eBook Giveaway if you wanna try your luck.

KD’s work can be found on Amazon or at Ylva.  Get information here on her sixth novel, Big Girl Pill which will be released on December 3rd via Dirt Road Books. For more information on KD visit her website