I love reading. Books are great, following a narrative and getting the payoff is legit. There isn’t much about books that I don’t enjoy. There are also other ways to consume storytelling. There’s movies, and plays, and games. But the thing that all of these are missing is the ability to react and experience things with the people listening to the story being told. These are things written and done before we see it. Lately I’ve been into DnD a lot. And you know what these stories have? No concrete ending in their sight, and that is a game changer.

I’ve been a fan of the PRG for a few years now, I’ll say it’s probably coming up on almost three? And this summer somehow managed to end up in a great group, who invited me to be a guest on a game and then asked me to stay on as a permanent player. It’s literally us players creating the story without any writing while the DM wrangles us children and makes sure we’re having a great time.

Here’s the thing. The games on average are every two weeks so I have a lot of DnD-free time on my hands in between and my patience is null. So here is what I use to feed my need in storytelling that’s not too formulaic (there’s a time and a place for that too).

First and foremost, Critical Role, available on youtube. I already recommended it months ago, but I would do it every month if I could. This show has everything. The DM is unbelievable. Matt manages to create a world that’s as vivid as any you’ve encountered, and his characters are memorable and amazing and wonderful in all of different ways. The players are just as good. They get into their characters and because they are all in some capacity writers, they truly know how to weave a good story. And how can I forget Lady Fortune? Everything is about those dice rolls. That’s the best part of the game. Everything is down to luck.

The podcast The Adventure Zone is just as dope, in a very different way. The McElroys as a family are all really good at what they do on this show too. While not as strict about rules as CritRole, their stories are just as deep and the characters they create really worm into your heart. They just started their third campaign, Graduation, with the first one, Balance, being the best thing in the world (and for some reason full of competent, strong, world-saving lesbians, and I’m not complaining), and the second one, Amnesty, being wonderful and deep and fun. So definitely give this one a listen. (I strongly urge you to stick through the first couple of episodes where they’re figuring things out cause the payoff is good.)

Then there’s Dungeons, Dice, and Everything Nice, and this podcast is great and super gay. I mean, everything I’ve suggested so far is real gay too, but this one is real Gay. The story is emotional, the characters are constantly pressured by stakes that are neck-high, and one of them’s got anxiety so most of us can relate. The women and nonbinary folks on this one are close friends and you can really feel that they are having fun, which always makes me have more fun listening. There’s nothing like laughter to make you feel like a part of the group.

Last, but not least, there’s the podcast Dames and Dragons. This one is also full of enbies and ladies and it’s hilarious and has that “pantheon of gods did it again, and now their kids have to deal with it” vibe. It’s funny, it’s a strong story, and there’s just so much messing around that, yes, it has that real campaign-in-your-living-room feel. 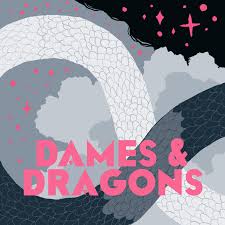 If you’ve wondered what all the hullaballoo is about when it comes to this decades-old game, check a couple of these out. These stories truly won’t disappoint you. Let me know if there are any other that you listen to or watch! Happy Holidays and see y’all again next year!