WE’VE BEEN HERE BEFORE, OR HAVE WE?

In memory of John Lewis, whose principles remained rooted in fairness, whose words chided the powerful and uplifted those without privilege, whose actions were nothing short of eloquent.

NOTE: My last blog, Excuse Me While I Burn A Few Bridges, elicited more than a few reactions. I appreciate all of the responses that arrived as well as the discussions that have begun in the aftermath of that essay, and I plan to return to the issues I raised in that essay in next month’s blog.

The word “Here” in this blog’s title refers to the days and weeks that follow an unjustified murder of an American citizen of color at the hands/knees of a police officer.

I assume most of us don’t know the exact number of people who have suffered these violent, unnecessary deaths, because some of the incidents are ignored and others are mislabeled, by accident or design.

“Here” follows a familiar pattern. Grief joins the frustration felt by people whose lack of sufficient income forces them to defer their material and inspirational needs. The union of grief and frustration bursts into roiling anger and propels a collective of heretofore voiceless people into the streets.  The air becomes saturated with broken glass, fire, smoke, teargas, gasoline and screams. Clothing, groceries, electronics, and other goods are taken from the shelves of stores whose broken windows make way for quick legs and even quicker hands that fill empty arms with merchandise to be used or sold by its new owners.

As the smoke clears, the perennial pot-riot chorus begins to chant.

“Why are they destroying their own stores? Where are they going to leave their babies now that they’ve burned down the daycare center? How will they ever get ahead? What a shame.”

We’ve all been here before, right? We’ve watched throngs of people, some seeming to be out of control, and others who march peacefully alongside their pain and frustration. We’ve admired the tenacity of the peaceful and flicked from our shoulders that fleeting notion that we should be out in the streets with them. Right? We’ve read their signs and the angry expressions that contort their faces. Right? This is all so familiar, one more rerun of past protests. Right?

Maybe not. Maybe there’s something different about these marches and marchers.

When we peek past the virus-preventive masks, we see faces of all colors. We see raised fists representing different races, ages, and gender identities. At times the white fists seem to outnumber those of color. 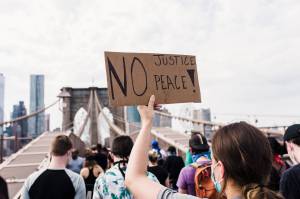 So, have we been “here” before?” Is this “here” reminiscent of the Freedom Riders and  those brave souls who marched across the Pettus Bridge in Alabama? Does this “here” remind us of the Stonewall Rebellion that incited the LGBTQIA struggle for equal rights? Do today’s marchers reflect their grandparents who took to the streets during the turbulent 1960’s?

I hope today’s “here” is a response to the ever-increasing evidence that many of our nation’s elected figures carry malice in their hearts, intentions, and acts. I hope today’s “here” is the rebirth of the coalition of Americans who nominated and twice elected Barack Obama. I hope these marchers signal the existence of a new social-racial-economic equality movement, a movement we very much need in order to restore our nation’s sanity and fealty to the U.S. Constitution.

We’ve been “here” before, but we must work to make this a new and different “here.”

Renée Bess is the author of five novels published by Regal Crest Enterprises, and the co-story collector of the Goldie Award winning anthology, OUR HAPPY HOURS, LGBT VOICES FROM THE GAY BARS, published by Flashpoint Publications. She is one of the recipients of the 2019 Alice B. Readers Appreciation Award. http://www.reneebess.com