With so many events having been cancelled last year, and restrictions continuing for the present, the pressure has been on organisers to find alternative ways to entertain their regular attendees. The Slaithwaite Moonraking Festival usually takes place in the February of odd numbered years, and so was unaffected last year. However, since many of its events are usually communal activities (lantern-making, parades, and so on), they had to come up with something a bit different for 2021. 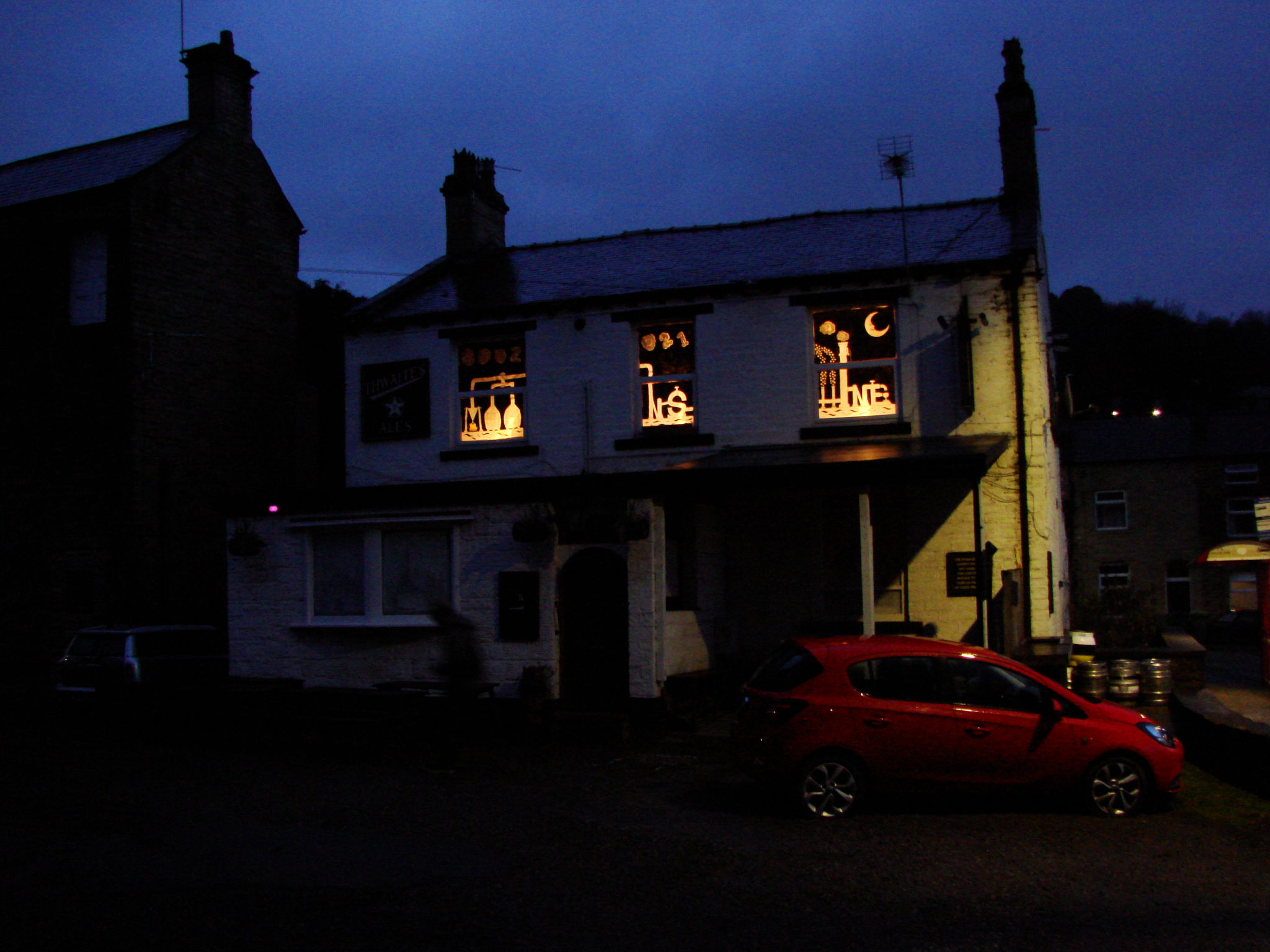 The Moonraking Festival has a thirty year history and is based around a legend common to many old towns and villages close to waterways, such as the Huddersfield Narrow Canal that runs through Slaithwaite. The story gores that smugglers would sink their contraband under the water and then go back on moonlit nights to retrieve it using rakes. If challenged by the authorities, they would claim to be raking for the moon, which could be seen reflected in the water’s surface.

In normal years, the legend is acted out by the light of the lantern procession; however in 2021, the lanterns were replaced by static displays in the form of decorated windows lit up from inside to be viewed by single households or pairs of individuals walking around the village on three consecutive evenings.

I visited the village on two evenings – and also took a few photos during the following day while picking up a few essentials from some of Slaithwaite’s excellent independent shops. On the Thursday it rained, and the colleague I was due to meet up with had been called into the office unexpectedly (I think they got more of a soaking than I did), so we rescheduled for the Friday night instead, though not before I’d tested out some of the settings on my new-to-me camera. That excursion at least gave me the opportunity to spot one window I’d been particularly keen to find – representing all regenerations of Dr Who – and several others I thought might specially interest my colleague.

Friday was dry, and we met up a fair bit earlier than we’d planned for Thursday (some people like to pack as much as possible into their weekends), so the lighting conditions were different, which gave me extra opportunities to get the hang of my camera. I also discovered that I could do with better contact lenses for low light photography, so it was as well I was able to get a decent picture of a double window display that so entranced my colleague when I went back on the Saturday (he tactfully told me that the exposure was obviously wrong for me on the Friday, rather than pointing out that I’m old compared to him, with poor distance vision to begin with).

This year’s event was a great success and plans are afoot to repeat it in 2022, with a return to the lanterns of past years in 2023: details here.

You can see other people’s photographs and videos and read more about the festival here; I’m certainly looking forward to the next two years’ festivals already.